every time i touch that track it turns into gold.. 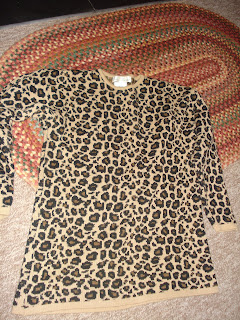 yesterday i spent a lovely day in hereford with alex, armed with a giant list of charity shops which we aimed to find and visit..

throughout the day, we did manage to find a large proportion of them, and both came away with bagfuls of bargains..

one of my finds was this chunky marks and spencer leopard print jumper, found ina charity shop and sold by a rather grumpy volunteer who didn't seem very impressed when i asked if one of the scarves being used as a tablecloth was for sale, and was told in no uncertain terms it was not!
i do rather like the jumper, the print is cartoony-enough not to look tacky, which can be an issue with some animal prints.. 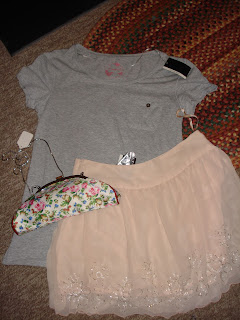 we didn't limit ourselves strictly to charity shops, and couldn't pass by primark without at least a little look..i think i was very restrained; i came away with a few purchases having spent less than £15..to the left, this peachy coloured skirt with silver beading was on one of the reduced rails for £5 and makes me want to wear it \with some grey knit tights..i bought this grey tee with the skirt in mind also..and other than that, just stocked up on some underwear sets, which i didn't bother to photograph! 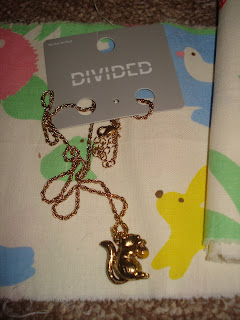 this little bag was brand new with it's original tags and packaging in another of the charity shops we ventured into, and is originally from Dune, so i was rather happy when it was only priced at £5.99.. 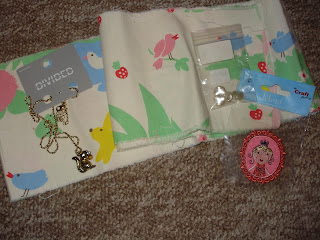 i couldn't resist this little squirrel necklace in h&m for £2.99 - i'm really liking all the woodland creature details which seem to be popping up all over the place at present, in the form of jewellery and prints..speaking of which, i was excited to find a whole shelf of haberdashery bits in one of the hospice shops, and had a search through in order to find some buttons for a dress i have almost finished, and when i came across this little scrap of fabric, i couldn't resist the print; i'm not sure what i have in mind for it yet, but i'm sure inspiration will strike before too long..as with the princess patch which i think may be added to a cardigan or pocket.. 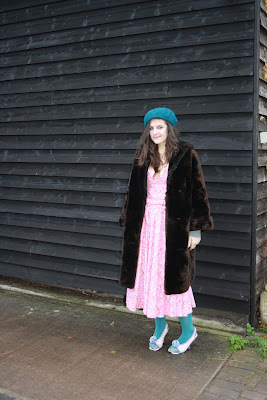 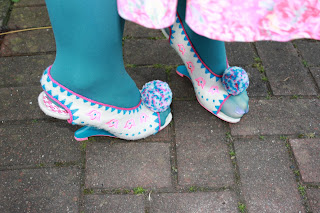 as for my outfit for the day- i picked this vintage laura ashley pink floral dress, which was an ebay find earlier in the year but i don't think has made it onto the blog yet, and added to it this pair of bluey tights, in order that this pair of irregular choice shoes would go with the whole outfit a little better - today was their first outing even though they have been part of the collection for several years - they came from an ebay seller who it turned out lived in my town, so i remember popping round to pick them up from their house...i love the funky shape to the heels on this pair, and i think the pompoms at least draw attention away from my weird claw toes..
to finish off my outfit i wore a multi-coloured stripey cardi from primark, whcih had the same kinds of colours but isn't really visible in the pictures, due to the giant vintage coat which i managed to repair last night, as it's so heavy that hanging it up had made the lining come away from the fur - but all fixed now, and perfect for being snug on a wintery weekend!
Posted by char at 08:51