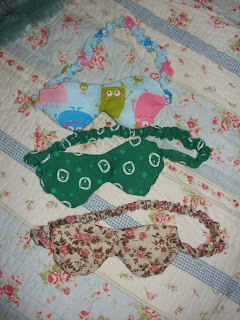 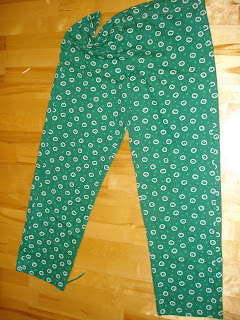 i have been busy with the sewing machine in any spare time i find myself with recently! i have made pyjamas both for myself, my sisters and some friends - my favourite patterns have been the dino and the monster ones so far, and i rather love this green fabric with stars and lion prints on..
i made some matching sleep masks, because when i was trying to think of things to add to the prize pot for the giveaway, i saw a sleep mask in one of the shops, and decided i could make one..so i drew around a massisve pair of sunglasses to make a basic shape, and then cut out, sewed, turned right way out, stuffed and sewed together with the elasticated strap in..they seemed to turn out ok and only took about 15mins each.. 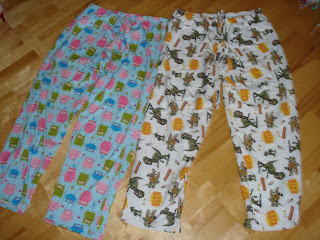 ﻿
as for the vampires..we have had a change-around of the patrols in my guides unit recently, so i gave the girls the option of choosing what patrol names they would like to be..three of the groups chose from the standard GGuk emblems, but there's nothing that says they have to, so the fourth patrol decided they would like to be Vampires..which meant a frantic thought of how to make a vampire badge..after a few image searches for cartoon vampires (as i didn't fancy trying to make a felt representation of R-patz x5!!) i spent my sunday afternoon at a friend's house, cutting out bits of paper to make a pattern, and cutting out everything x5 and sewing together..
the girls got them on monday and all seem to love them, and everyone was quite convinced they look like vampires, so that was my main worry overcome- i'm quite pleased with them :)
Posted by char at 12:47