i was hoping that i could leave this star-crossed world behind.. 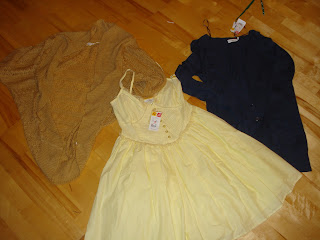 i must point out that i have somehow managed to be super-restrained in the january sales! i think it's because, quite frankly, they were mainly full of the trashy dregs by the time i got to them, and there are a lot of things on the wishlist which i am waiting to hit the stores, so i am saving myself! but i did pick up the above few bits from the new look sale a couple of weeks back - the yellow dress is one i have got in a pale blue colour, very cute and perfect for summer, and as this was an entire £2 i didn't think it would be sane to leave it behind! the blue cardi is a fairly basic one in the long length i tend to favour recently, in a denimy-blue with buttons detailed partway up the back and sleeves..
and the mustard crochet shrug was not a sale purchase, but something i put on my xmas list, and then put some of my xmas money towards, but having worn it once, i'm not as taken with it as i first anticipated, which is quite a shame..it's a colour i really like, but there's just a part of me that worries it's more frump than fab.. 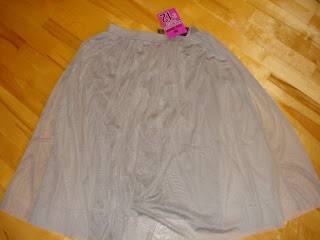 i have always said, despite seeing so much about them on other blogs recently, that i'm not a regular customer of next - i find that on the rare occasion where i see something i like in their stores, so does everyone else in the town / everywhere you go! so i tend to steer clear, unless i have a particularly dull lunch hour which needs filling, as there is one on the retail park near where i work..
i was drawn to this skirt for it's similarity to the one i tried on in forever21, but this one isn't floor-length; rather it's that 'midi' length that seems to be hitting the shelves at the moment..it's a plain shade of dove grey, but is made up of a couple of layers of tulle over the base layer, so isn't too plain, and it was down to £12 in the sale; now i just have to figure out a way to style it..
Posted by char at 10:54