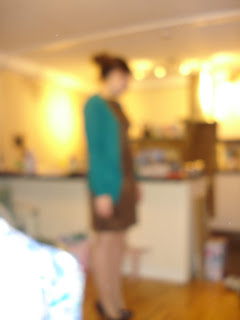 back to work outfit consisted of a leopard print dress from tesco clothing, which i have outfit-posted before..but instead of the boring black cardi and accessories i usually go for, i went with boring black shoes (which actually is probably unfair, are glittery, and were a total super-bargain when i was charity-shopping just before my graduation and panicking that i didn't have any sensible black heels - i seem to recall they were £4 and they fit absolutely perfectly - i have no idea where they were from originally!) and then added the new sale purchase cardi from river island instead.. 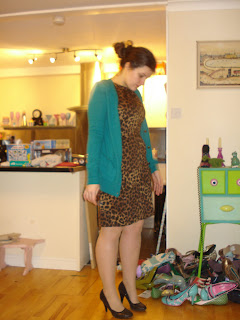 i like the colour of this, although the wool has started to bobble a little bit on the arms already after one wear (not too badly, but noticeable, which i think isn't great) the one thing i thought would be annoying is the fact it has shoulder pads in it, but to be honest you can hardly tell as they aren't that big..
Posted by char at 10:04