little did i know that you were romeo.. 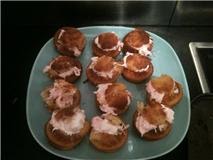 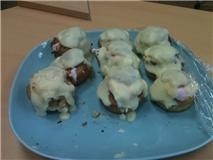 so, i am in 'guides event preparation' panic mode..we are running a market stall to raise some funds this week, and will be selling sweets, so i spent my thursday evening in the kitchen after an epic supply trip to the supermarket..with some of the leftover marshmallows, i decided to have a go at a recipe i saw on a recent blog post, hummingbird marshmallow cupcakes..
i have to say the cake mix recipe was very simple, and suggested using a mixer, which would have made it quicker still, but even so it was only a couple of minutes of mixing, although i had to whip thm out of the oven a little sooner than the recipe suggested or they would have been fairly brown! (i think this has more to do with the fact i had been baking other things previously that evening, and the oven may have been a little too hot)..the vanilla frosting went together in a matter of minutes also, whilst i was waiting for the marshmallows to melt, in a bowl over a saucepan of water..this took absolutely ages, i'm not sure if i'd done something wrong, and when it was finally melted, it was fairly tricky to get the mix into the cutout sections of the cake, without it sticking to everything; spoon, knife, bowl, fingers, anything but the cake! however, in the end, i managed to perfect the scoop and scrape method, and got marshmallow into all of the cakes..they looked a little messy when done, so i ended up adding the frosting on the top as i was worried they would otherwise be a little dry due to a few too many minutes in the oven..i was a little concerned this may  make them a little too sickly sweet but they came to work with me on friday and seemed to go down very well with everyone! i think i ate enough melty marshmallow to put myself off marshmallow for a while, so can't say i've tried one, but am told the cake is a lovely fluffy consistency..it's a recipe i would probably try again, with the addition of little mini mallows in the frosting i think they would look rather fairy-princess-cute!
Posted by char at 10:02