you can cut your split ends, you can't cut your roots.. 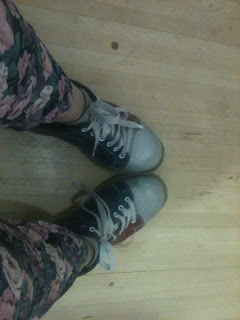 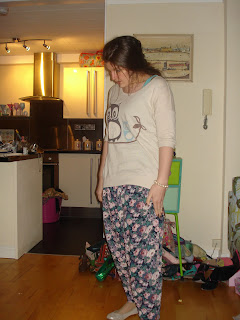 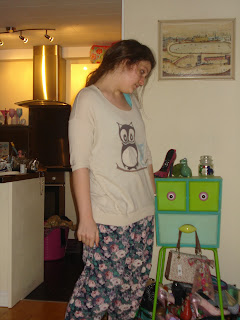 not sure what i was doing to end up with all these slouchy, ridiculous poses, but never mind..this was my frumpy outfit when my cold hit me and i felt like crap on wednesday evening..my friend and i had planned to go bowling, and one of my biggest moans is when certain 'friends' cancel plans with about a half hour to go..it drives me mad (especially if they are coming over and bringing food or something!) so i didn't want to cancel my plans and be one of those people, and a hypocrite..
i'm really not a trousers person, but i was feeling a bit under the weather, and also couldn't stop shivering, so i layered them up over a pair of tights, for a little bit of extra warmth..hilarious story about when i purchased this pair of trousers; we were in cheshire oaks warehouse retail store, and i was in the queue with them, when a girl joined the queue behind us with her bf and holding a pair of the same..she then saw that i had them, said to the guy she was with "oh i'm not getting them after all, she's getting a pair - i don't want to look like her!"..i can't even remember what i was wearing, but clearly it was something offensive to look at..i was kinda amused, perhaps i should have been offended?! ah well..i love the owl print on this jumper, i saw it on beautiful vicki's blog a little while ago but hadn't realised where it was from, but when i saw it in matalan a few weeks back i just had to have it, so i promised myself that if i had managed to do all my food shopping for the event i was catering for one evening, before the shop shut, i would pop to matalan and pick it up - which i managed, with about 5mins to spare (i had to beg the security man to let me in, as he was letting the barriers down on the door!) in all honesty, i'm not sure it's the most flattering shape on me, i think this whole outfit makes me look fantastically frumpy, but i opted for comfort over style to head out to the bowling alley..
Posted by char at 10:42