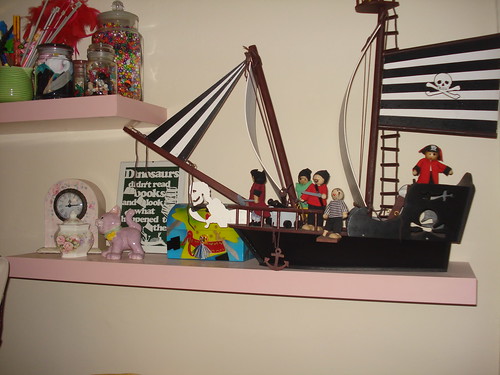 Yesterday, I was chatting to my friend about house hunting - she is starting to look for a new home and project, all of which is rather exciting. We got talking about how much easier the whole prospect of moving would be if we were those minimalist types who didn't have hoards of "stuff and clutter", kept around for sentimental purposes.


I must admit, minimalism doesn't really do it for me. I like to hold onto the things which mean something to me, or hold memories of happy times. So, thinking about this, I took some photos of my living room shelves. (Kezzie has been asking for a shelf tour for a while). 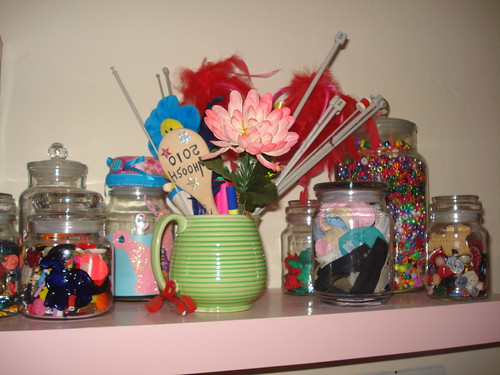 One of the main things on these shelves is my pirate ship. This was a Christmas present a number of years ago (although not that many years, I was definitely in my 20s) and I have to admit that it stayed in it's box for a while. It was a toy, but came in flat-pack style pieces of wood which you had to build with screws and such, and I just didn't really get around to it. One day, my grandad offered to do it for me, as he used to love putting together Airfix kits, so I took it to his house and collected it again a week or so later. He rather loved having a project like this to do and I love the fact that he made it for me - hence, pride of place. 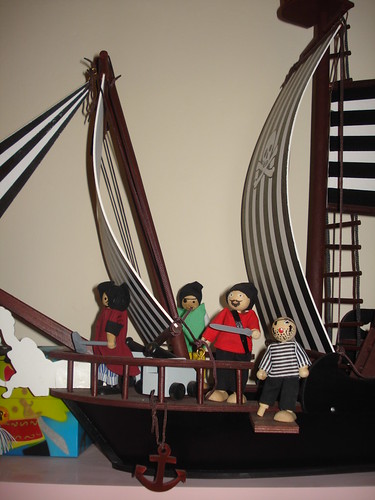 The parrot treasure chest was a gift from a friend when I was in university; I think it came from Octopus, which had been one of my favourite quirky shops. It houses things like tickets and gift vouchers and things which I need a "safe place" for before I use them - train tickets for upcoming events, that kind of thing. 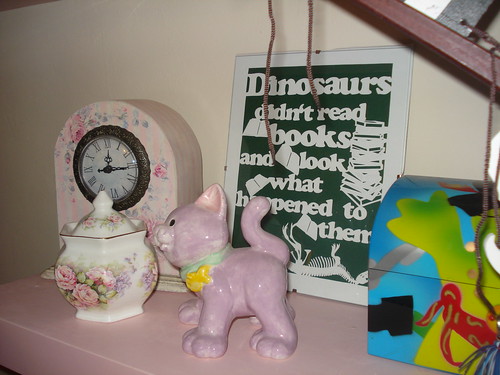 Also on that shelf is a ceramic kitten, which I painted at one of those ceramic party things which were all the rage a number of years ago. Little Sis had a birthday party there and I went along to help out. The clock came from a vintagey antiques shop in Leominster back in 2009. I love it but after the flood last year it stopped working, so I took it to a local clock repair shop. Unfortunately, I was told that they couldn't find the mechanism I need for it, but I might be able to track one down online. I haven't so far, but kept it just in case and was amazed to notice that about a month ago, it started ticking again, so I can only assume it's dried out again.

The dinosaur print was a Christmas present from Sarah. I love it but haven't yet got around to drilling it onto the wall next to my bookcase, so it's sitting there temporarily. 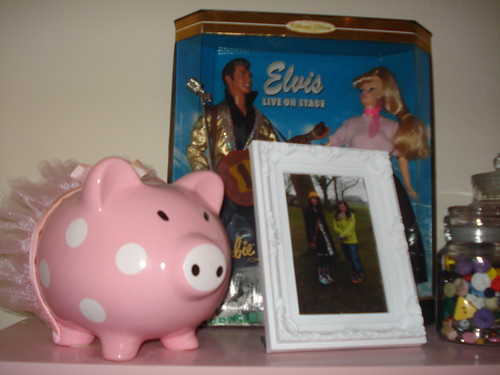 The other shelf is a little higher up and is home to a pig money box which Sister bought me for a birthday, a photo which Alice sent me, taken of us at Norbury. Ad for Barbie and Elvis, they were a birthday present, brought back from a business trip to America when I was pretty young. I'm not sure whether they were a great present or not, as when I unwrapped them I was told that I wasn't allowed to open the box, as they'd be a collector's item one day. I'm quite sure that's not the case, but I had plenty of other Barbie dolls and they did stay in the box. Which got flooded last year as well, so isn't really in the greatest condition.

The other half of the shelf houses jars of buttons, beads and zips, and a little milk jug, picked up at a vintage fair about ten years ago, which is home to a mixture of knitting needles, feathers from a very pretty bunch of flowers I received a long while ago, and a wooden spoon which served as a memento of a competition we won at a regional guide camp in 2010. The jars are about to have a little Pinterest-inspired makeover, so they will no doubt feature in a post of their own soon enough.

Do you prefer minimalism or is your home filled with memory-inducing nick-nacks?
Posted by char at 15:43