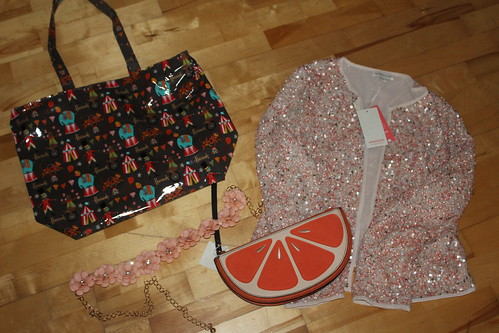 What have you been buying lately? Aside from fabric, and a new mixer for the kitchen, I've picked up a few bargains in the past week or so.

Obviously a trip to London would be incomplete without a trip to Oxford Street. I only had one thing in my sights, which was this Sophia Sequin Jacket from Monsoon. Luckily, the Monsoon sale began last Thursday and the Oxford Street store had the jacket in stock, as the website was sold out. I'm looking forward to finishing off just about all party outfits with this, as I think it's beautiful. 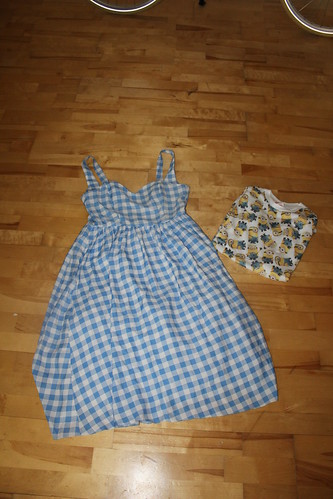 From Harrod's I picked up a new shopper bag, which I'm going to try hard to remember to take with me when I go grocery shopping in an attempt to use less plastic carrier bags. I have a couple of shopper bags now, so should be able to leave at least one in the car and one with my bike, which should cover just about any eventuality.

From New Look, this orange clutch bag to add to my growing collection of cutesy fruit bags. I already have an apple handbag and a watermelon clutch, but it's so cute.

We did pop into Primark, which was ludicrously busy. I found this gingham dress, which I've been keeping an eye out for since about March, reduced in the sale to £7. We also bought matching minion t-shirts, as we're just that cool.

I love this floral belt, as well. I'm planning to dress up some of my handmade dresses with this at the waistline, to add a bit of detail.


Then, on Saturday I went to drop off a couple of things at the charity shop in town, and came out with this vintage Laura Ashley dress - a steal at £9, in my opinion. I do find charity shop pricing can be so hit and miss. It's not easy to tell from the photo but the bodice has a lovely scalloped edge. 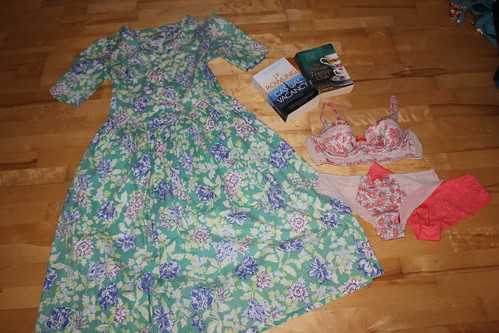 I picked up even more books to add to my to-read pile. The Casual Vacancy by Rowling. J.K. ( 2013 ) Paperback

has been on my radar for a while now, but I've not read it yet and I've vaguely heard of The Vintage Teacup Club

New underwear from M+S because I've recently had a clear-out to get rid of all the things which are now the wrong size, and when I was at the cafe on Saturday morning, they were giving out £5 vouchers for the lingerie section.

Have you found any good sale bargains lately?
Posted by char at 08:30