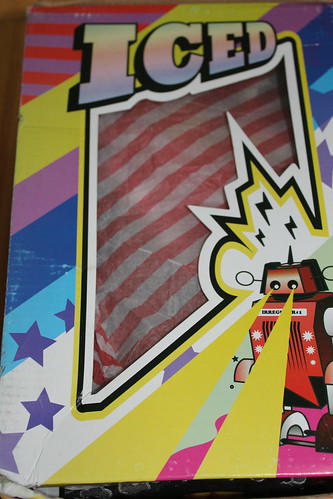 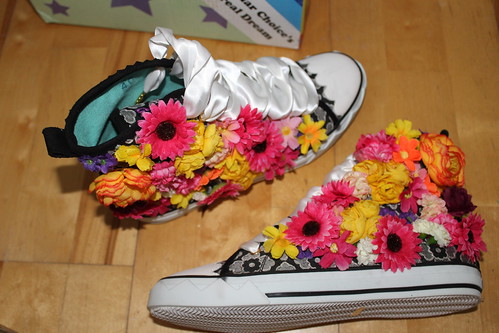 A first for me. I've never had a pair of the Irregular Choice ICED range before, but when I saw that this pair of Secret Garden were being sold off cheaply due to the fact they'd been on display, I decided to give them a go and snapped them up.

The fit of these is true to size, as now seems to be the norm with Irregular Choice, who have been making a special effort to sort out their sizing issues. I know that this is something which has been revisited three times this year, but going by recent purchases, I do think that their irregular sizing issues may be a thing of the past!

Secret Garden is basically a high top trainer. I got the black pair which features a sort of grey pattern which has an almost jacquard look to it. The sides are covered in an assortment of faux flowers, which are nice and bright and I think add a bit of interest.

The "display" scuffs were absolutely minimal, but I wasn't overly impressed with the grey marks on the backs and side of the soles, where the rubber seems to have been sealed. They don't look as though they should be there, so maybe that's why this pair was being sold as "ex-display". I'm sure that once I wear them in a few times these will not be so noticeable, as no doubt I'll cause other scuffs and marks on the white sections of the soles.

What do you think of the ICED range from Irregular Choice? Super street, or should they stick to party shoes?
Posted by char at 10:00