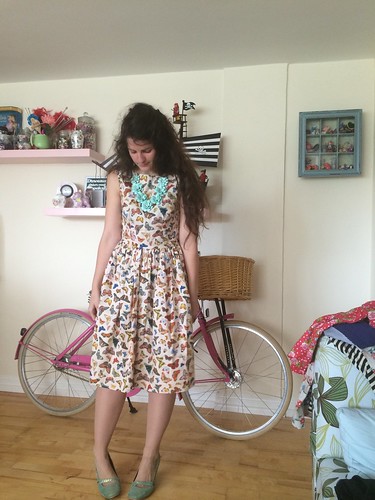 OK, so this might not be the most exciting or inspiring of outfits. And yet, I really liked it when I wore it on Saturday.

This beautiful butterfly fabric was on my Frumble wishlist, but I was treated to it by Peugeot as part of the #RandomActsofJoy campaign they've been running on twitter. I made this dress up as soon as the fabric arrived.

I chose to use the Betty bodice, but to add a gathered skirt instead of the circle from the pattern, mostly because of the amount of fabric I had to work with. I really like how it's turned out, though. I also love the way that the colours in the print make it easy to wear with just about anything.

I was astounded when I looked back through the photos and realised I'd not yet worn these swan heels. I guess because I wore the boot version very early into the whole thing that I'd been thinking I'd worn these. I hadn't, until Saturday. They're one of the first pairs of Irregular Choice heels I bought and every time I take them for new heel tips (like, maybe twice, but "every time" sounds better), my hilarious shoemaker is always like "Oh, aren't these heels crazy". He clearly doesn't know me, as I'd class these as pretty staid.

The necklace, similar to things I've seen in just about any high street store in the past few months, was about £4 from eBay and although it was a little longer than anticipated, I really like it. Tacky flower jewellery isn't going to go out of fashion with me anytime soon, that's for sure.

I keep losing track of the days this week. I think because I was feeling poorly yesterday and skipped out on my spinning class, it's thrown me all off-kilter. I did go back this morning, for Metafit, as my gym guilt got the better of me, but that may not have been the wisest of decisions. I came pretty close to fainting a couple of times. Yuck.
Posted by char at 13:16