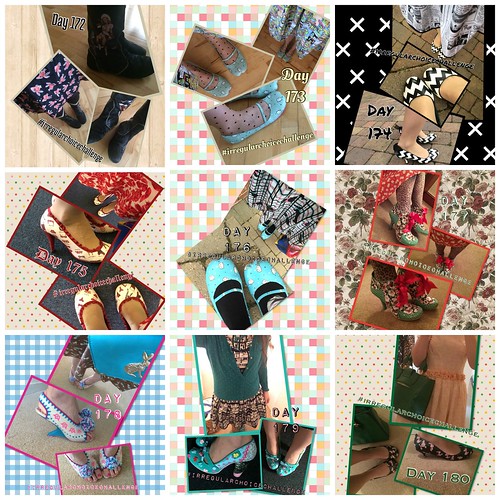 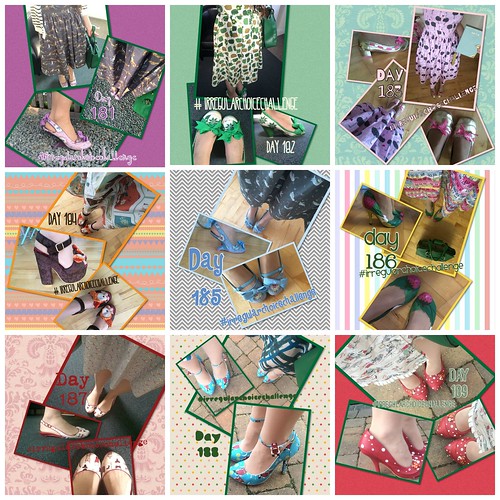 I don't suppose this post needs a lot of introduction; it's fairly self-explanatory. And I don't suppose you'll have missed the challenge so far, as it seems to be fast approaching the big 2-0-0! I did a little count up last week and made a list of the pairs I still had to wear, so that at least I have it written down for the mornings, and can choose from the list, which has made choosing what to wear a lot easier lately, but it did surprise me just how many pairs I still have left - I thought I'd be done by now!

So, the recent wears: My final two pairs of Prom Princess, (days 181 and 185) and the other two underwear print pairs (days 187 and 175). Also my last two pairs of the kitty print flats (days 173 and 176). I thought I'd have a lot more pairs of flats left to wear at the end of the challenge, as I tend to favour heels as a general rule, but to be honest I've been wearing the flat pairs interspersed with heels, so I only have a couple left to wear.

One of my favourite and first-purchased pairs: the toadstool courts finally saw an outing for Day 189. Another long-time favourite, the Robot court shoe also saw the light of day for the first time in goodness knows how long and I finally got around to wearing Abigail's Party, which I bought in London that time when I was judged for  buying too many things by a stranger!

Any favourites in this lot?