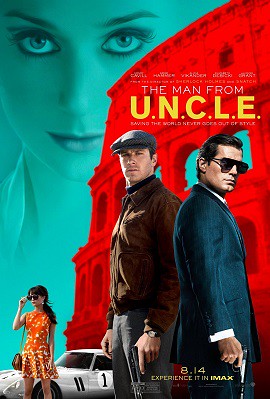 This week, I went to the cinema for the first time in a few months. In fact, I can't recall what the last film I saw was. I don't pay a lot of attention to online ads, I don't read magazines and I don't own a television, so I've got to admit that a lot of film releases totally pass me by.

I'll admit that I'd not heard anything about this film before we decided to go and watch. That said, once I was told it was a Guy Ritchie film, I was pretty much convinced. I've watched and enjoyed his films in the past (OK, so my enjoyment of Sherlock Holmes was more to do with the existence of RDJ and nothing to do with the direction, but still).

So, we went, we watched and I have to admit I enjoyed it more than I expected to. Henry Cavill, one of those who I've never really understood the hype about, was great in his role as bad-guy-turned-good American spy. His Russian counterpart, who begins as an enemy before it's dropped on them both that they're going to have to work together, was also really well played by Armie Hammer. (Is it really bad to admit that having never heard of Mr. Hammer, I actually googled to see whether this was a real person's name or not? Spoiler alert: it is.)

So, the two spies are given a mission to protect pretty mechanic girl, whose father disappeared in suspicious circumstances around the war. The two have to use the girl as bait to track down her uncle in the hope this will lead them to her father.

There's a lot of amazing 60s styling, fashions and crazy-rich racetrack parties, villains with their own islands. So far, so James Bond, right? Well, I guess a little bit. But I'll go out on a limb and say that I enjoyed it a lot more than any Bond film I've seen. I guess that's because it seemed just less...arrogant (?) than any of those. Like it doesn't take itself so seriosly? There are funny moments in The Man From U.N.C.L.E. and they're just allowed to be funny, before moving on.

Anyhow, have you seen this? If not, I'd thoroughly recommend it. If so, what did you think?