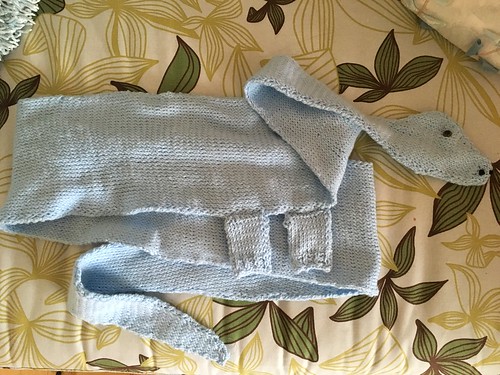 I mentioned a little while ago that I was working on the Sincerely Louise Diplodocus Scarf, and this weekend I finally got it stitched up together, just in time for the.....first day of Spring. Ugh.

The pattern itself was probably the easiest Sincerely Louise pattern I've put together. None of the colour changing of the badger scarf and much less fiddly than the pterodactyl bag, which I've just realised I've not posted about yet!

I have been knitting this with no pressure, which made a nice change. I took it with me on the train to London, in the car (again to London) and to various friends' houses for evenings spent in front of the TV, but I wasn't in a rush to get it finished, unlike previous projects, which made the whole process quite enjoyable.

This took almost exactly two balls of wool, which I bought from Wilko when I was in there for something else, so was super cheap. I had an eye left over from the packet I bought to use on the previous patterns and stitched the nostrils on with some scraps of black wool. A rather low-budget project, as I also bought the pattern on Etsy when it was on sale.

I've attached a brooch pin onto the back of the face section, so that I can pin it on, but I think I might need to alter the placement of the pin. But, all in all, I'm pretty pleased with how it turned out. A really cute pattern which I'd definitely recommend. 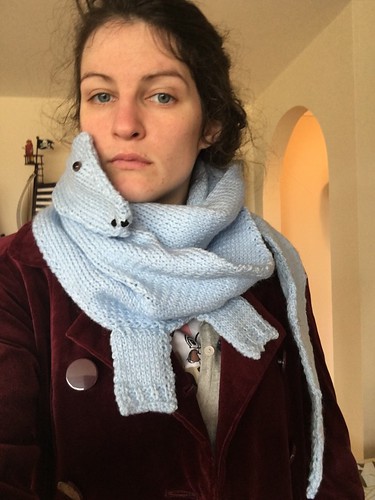