In January, I decided that my gymwear wardrobe needed a total overhaul. In the past, I've favoured tracksuit bottoms (the thicker and looser, the better, as I'm not a fan of my legs at all).
As is probably apparent from just about everything I ever wear, I'm not a trousers fan, but I like even less things which are tightly fitted.

I browsed all of the shops, scouring their resolution-gymwear selections and struggled to find anything like I'd had in the past. For some reason, I decided that I was going to try a pair of leggings, and ordered some from Nike in their January sale. I was a little nervous about wearing something so tight-fitting to the gym. I'm very self-conscious about my shape and size, and have always been so. But it was OK. I mean, nobody laughed and pointed at me. I don't think (hopefully) anyone else even noticed, so I decided they were a safe addition to my gym bag.

Since then, I've added a few more pairs to my collection. As someone who averages ten gym sessions, six classes and a couple of runs per week, I tend to find I need quite a selection. I figured I'd share my thoughts on the pairs I've bought recently and whether I'd recommend them or not. 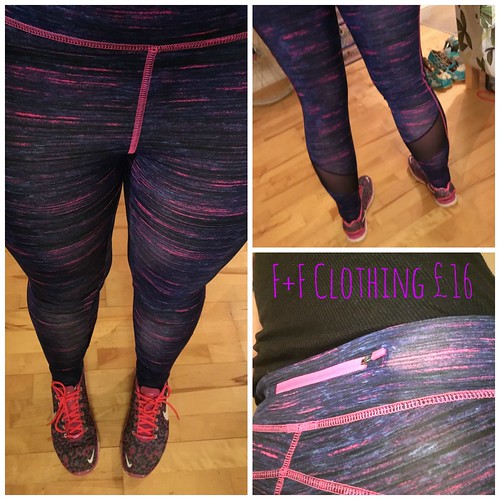 I'll start with these F+F space dye leggings, which I picked up in store a few weeks ago. I packed them for my guides weekend at the beach, as I'd decided on some running routes for the mornings and it wasn't until I unpacked them and put them on for the Saturday morning's run that I noticed they had these mesh sections on the backs of the legs. I'm not sure I would have picked them up had I realised this in the shop, but as there wasn't a lot I could do about it, I cracked on. And I don't hate them.

The fabric on these is pretty good; thick enough not to go a little see-through when it's stretched, which is quite important to someone with ridiculously chunky legs and a comparatively small waist (this is the reason I can't wear jeans or trousers). I will point out here that I have fairly disproportionately large calves as a result of five spin classes per week for several years, and this is something which can make leggings tricky for me.

Verdict: My verdict on the F+F leggings is that although there's a little visible stretching on the calves, they're a great pair of leggings and are my first choice for running outside, as they have a zipped key pocket on the back of the waistband. They also have something of a shine to them, which seems to mean they're more water-resistant for running in the rain than others. I'd buy other F+F leggings for sure. (7/10) 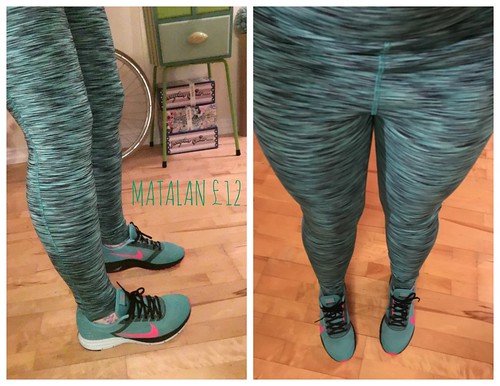 I can't find this colour on the Matalan website anymore, but they're available on there in grey. The cheapest pair of my lot at £12, I have already had more than my money's worth from these. The fabric here (again a polyester / elastane mix) seems to have so much stretch in them. They fit my waist a lot better than I've found any other pair to.

There's no issue with these in terms of visible stretching and all of the seams seem really securely stitched. The only thing which I feel lets these down is that they don't have a pocket, but they're another pair I use to run in as the fabric used boasts quick-dry technology (it does *seem* to work, although I don't know any of the science behind this). 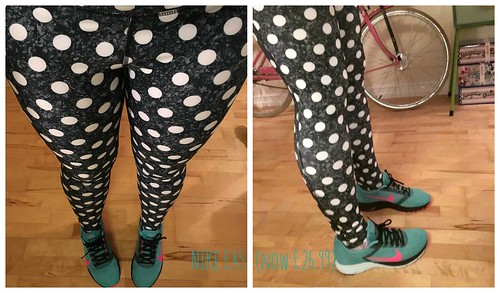 This was my first purchase in the gym leggings market. From Nike, as you'd expect these were a little more pricey than their supermarket and high-street counterparts, but I've always felt that Nike were one of those brands who know their shit when it comes to fitness gear. I have been a loyal fan of Nike trainers for years now and don't think I'd switch to another brand, so they seemed like a natural starting point for some gymwear.

I ordered these from the Nike website in their January sale, which meant I paid about £30 for them rather than their £45 RRP. They don't seem to be on their own website in this print anymore, although I've found the same ones I bought here on SportsShoes for £26.99 if you fancied a pair.

These are my second pair, as I first ordered the Small and found they were just too tight on my calves, so had to return and size up. These are much better, although a little large on my waist, so sometimes I feel I have to pull them up. This is mostly just in my head though, it's not as though they've ever actually fallen down at all, I think it's just that they're a little loose around the waist itself.

These fit really well on my legs and the fabric feels sturdy, if that makes sense. They have plenty of stretch in them and are nice and long. I can't cope with capri length anything (makes the afore-mentioned super-calves look even more gargantuan), which seems to be the trend with a lot of gym clothing, so I'm glad these go right to my ankles.

Verdict: The most expensive pair I've bought, even with their discount code, but you can tell that the quality is that much better as well. All of the seams feel stronger, there is stretch but no visible stretching of the fabric and the inner key pocket on the waistband just make them feel much better quality. I'd buy these again, perhaps in the blue polka dot print. (8/10) 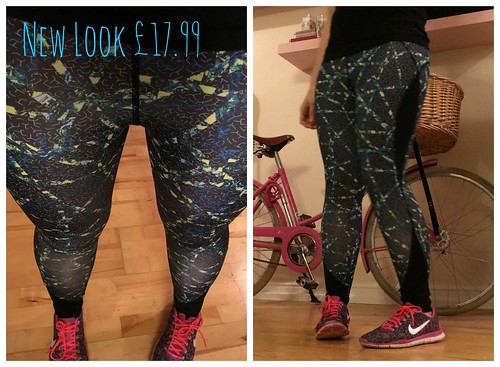 Last week I had a couple of hours to kill in Telford whilst waiting for a meeting, so wandered through the shops and picked these up from New Look. I wore them for the first time this week, and wished I'd tried them on in the store.

The print is about the only good part of this pair, I fear. They fit on the waist fine, but on my legs they stretch, visibly and awfully to the point where they look a little see-through. The stitching along the shaped design down the sides just looks as though it's dreadful quality and won't stand up to much use. I mean, I know I can blame the size of my calves a little bit for the stretching, but I think this is more than I should reasonably be able to expect, so I'm going to chalk this one down to experience and stick to my other pairs in the future.

Have you any gym wear favourites?