I have Kezzie to thank for these shoes to my attention a couple of weeks ago. I don't think I'd have ever spied them had it not been for her comment on an Instagram post. I checked them out as soon as I got the chance and the rest, as they say, is history. As such a big fan of quirky heels, these macaroon heels really appealed to me. They're by Daisy Street, and there's suggestion on their site that they are Limited Edition, but they're also available on ASOS, where they're still in stock (at time of posting) in most sizes. 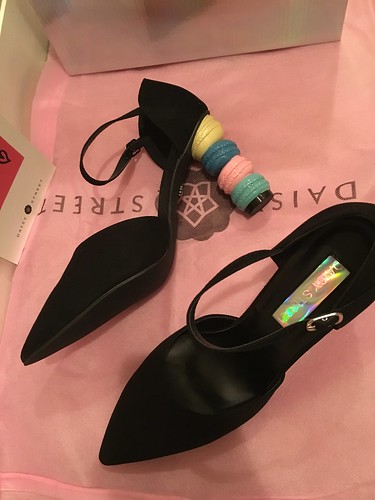 I was a little wary at first about the pointed fronts of the shoes. I have always been a little reluctant to wear anything too pointed, as I fear they make my feet look longer and I already have fairly large feet. I shouldn't have worried; they're actually pretty flattering and really comfortable. I have quite wide feet which can sometimes make me wary of pointed fronts as well, so I was pleasantly surprised with these. I've not had anything by Daisy Street before so had no idea what to expect. 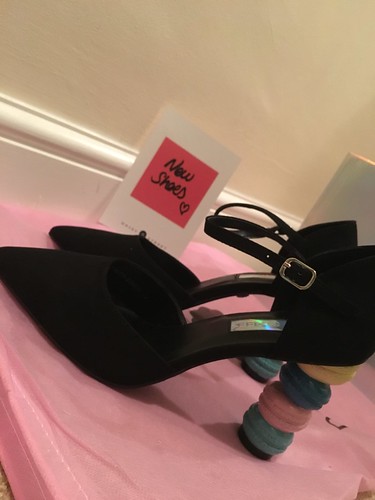 So, the main feature of the shoe is the cutesy heel, shaped like a stack of macaroons in pale pastel colours. Both heels are the made from the same mould and the colours are a bright and shiny finish. I love that the mould is even shaped so that the macaroons look textured where they should, to keep them looking realistic.

Although the heel itself is a lot narrower than the Irregular Choice character heels I've owned (which is about all I have to compare it to in the world of shaped heels!), they are perfectly sturdy and solid to walk on. The shoes have ankle straps which add to their classic understated look from the front, and I love the idea that from the back they look completely different.

Frankly, I really like these and was surprised by their quality. They arrived in a lovely holographic box, with a dustbag to keep the shoes in and lots of packaging, and they've made me rethink my impression of the cheaper end of the quirky shoes market. At around a quarter of the cost of their IC counterparts, I'd say these were a high street steal. Thanks again to Kezzie for the heads up!