It starts with a suicide and ends with a death.

My third blog tour stop of the week - I've spent a lot of my festive break reading, as you can tell!

The first few pages of Girls on Fire asks the reader to imagine two girls; you see examples everywhere of that kind of friendship. Two ordinary girls, wrapped up in their own little bubble; their world. We then hear about Hannah's friendship with new girl, Lacey.

Moving in from out of town, Lacey bonds with Hannah (who is nothing special; an entirely unexciting yet relateable high school kid) over their mutual hatred for Nikki Drummond (who plays the role of Queen of their school, her popularity increased tenfold at the news that Nikki's boyfriend commits suicide in the woods on Halloween night).

I found these classroom figures easy to picture, drawing similarities to Lacey and Hannah (who is renamed Dex by Lacey, as she thinks it's a better name), and remembering how intense those friendships can be when you're growing up in a small town together. The two of you against the world, it can seem that nothing can be so intense, right?

Lacey's past comes out and she's a driving force in persuading Dex to push her boundaries. Obsessed with the grunge scene, there are endless Kurt Cobain references Nirvana providing the soundtrack to the girls' road trips to the sea, experimenting with boys and drugs and Satanic rituals.

Girls on Fire is definitely towing the adult side of the YA line, but it's compelling. A slow burner (pun intended), I have no doubt it will hook you right up until it's chilling crescendo.

See what the others thought of it in the coming days.. 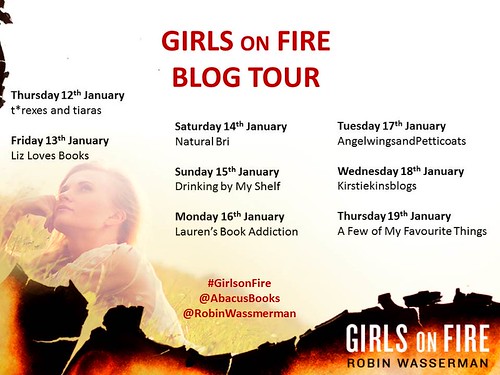