Soundtrack of my life.. 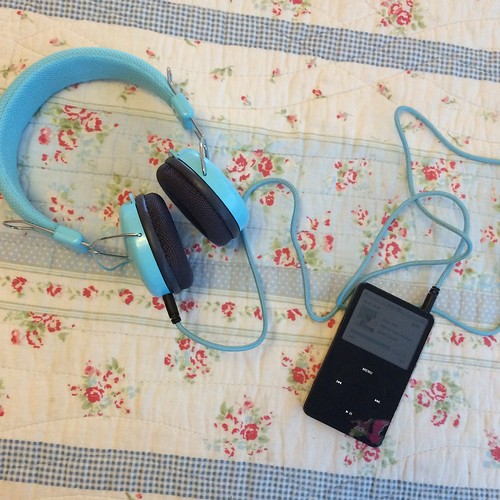 It's very rarely that I'm at home alone in absolute silence. If I don't have my iPod (my 30GB Classic is still going strong after 11 years and I'm absolutely dreading the day it gives up the ghost..) on shuffle via my Bose speakers, it's likely that these days I'll have a podcast on the go.

Only recently (about October) did I really begin downloading and listening to podcasts. I'm not entirely sure what prompted it, but it's much easier to concentrate on sewing or knitting with a podcast on rather than a DVD in the background, I've found. Here are some of my favourites: 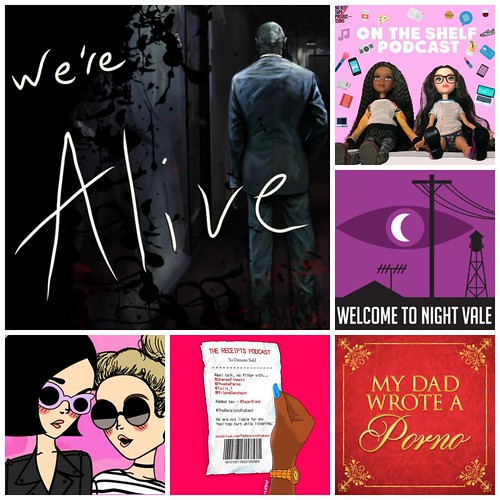 We're Alive: How would you deal with a zombie invasion? Well, I'm only a few episodes into I'm Alive, but so far Michael and his merry band of friends seem to have a plan. I kind of love zombie stories, so I'm excited to listen to the rest of this and see how things turn out for them.

On the Shelf: Sophie and Nemat are two thirty-somethings who give their relatable and down-to-earth take on the world of online dating, along with lots of other topics. They give advice to their younger selves and I like the way that they're only a few episodes in but I feel as though I'm really getting an insight into their lives.

Welcome to Night Vale: Oh, this is so creepy and yet also brilliant. Night Vale is a fictional town in the middle of the desert in America. I'm getting such feelings of nostalgia listening to this one because I can absolutely picture the town I drove through en route to the Grand Canyon when I was staying Vegas. In Night Vale, however, all of the conspiracy theories come real, there are creepy goings on and we hear it all reported by the community radio station. Each episode features a song in place of the weather report and I listen to this one when I'm struggling to get to sleep, as I love his gentle, monotonous tone of voice.

Guys We Fucked: I was a little lost after running out of MDWAP and perused the charts for something which took my fancy. I was hooked by the title with this one and started from the first episode, which I tend to do with any podcast (I'm not a fan of jumping right in to the latest episodes). I'm now up to date (I think that's about 170 hours or so). I absolutely love this one - Krystyna and Corinne talk about sex, relationships and everything in between, No holds barred, which is the approach I've always taken to talking about sex. I really relate to them and my eyes have been opened to a few of their topics, but have pretty much enjoyed every episode.

The Receipts Podcast: This is a really new find for me; I listened to the first couple of episodes this week. Like On The Shelf, this one is UK-based and themed on relationships and just about everything else. So far I've listened to the four hosts cover topics such as dating, guys with female friends and being cheated on and I love that it's so relaxed that I feel as though I'm a fly on the wall of their conversation.

Other go-to podcasts (other than my daily fix of The Archers, of course) include Gilmore Guys (which I'm planning to listen in between rewatching the series, as I love the guys' commentary but it's been a while since I last watched the series), and basically any Radio 4 comedy or drama series. I also always make sure I have a couple of episodes of The Infinate Monkey Cage downloaded because all I want to listen to sometimes is the lovely Prof. Brian Cox. I adore him.