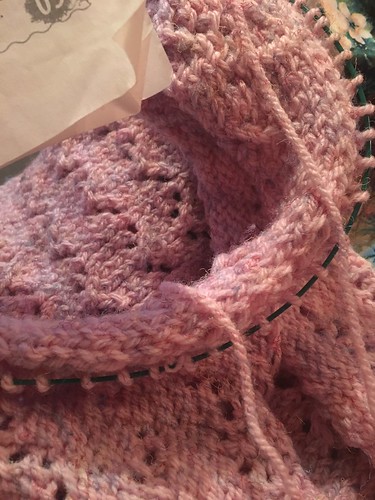 It seems like a really long time since I last joined in with the #yarnalong, and that's mostly because I've not really made any knitting progress for a while now. I took my Hetty cardigan (yes, still working on that after beginning it in November) to Sarah's at the weekend and after a couple of false starts, I think I've progressed one of the shoulders. After the other one, it will be just the sleeves and the neckline and then it will be done - yay.

Bookwise, I've been finishing off several things recently, this one at a friend's house - I've been reading a few more chapters each time I've stayed there.

Having just read up on this, I now know (although didn't before) that this was written by an actress / vlogger, who I've got to say I hadn't before heard of. This book took me a little while to get into, but was a perfectly nice love story between two people who couldn't be together. So far, so much like any other romance novel, surely.

But when Evie Snow dies, she finds that instead of moving on to the next life, she's back to being 27 years old, where her life took some turns and she's able to visit those that she left behind. A smattering of magical happenings and a fairly primitive writing style made this book one which was fine for reading before bed, but not one I'd be likely to pick up again.