Second star to the right..


I do seem to be getting very lax at this whole blogging thing. I'll have all these ideas, then when I turn around it's been a week and I haven't posted anything at all. I'd apologise, but that seems to be something which happens in every area of my life right now. I suppose the answer is to try and manage my time more wisely. 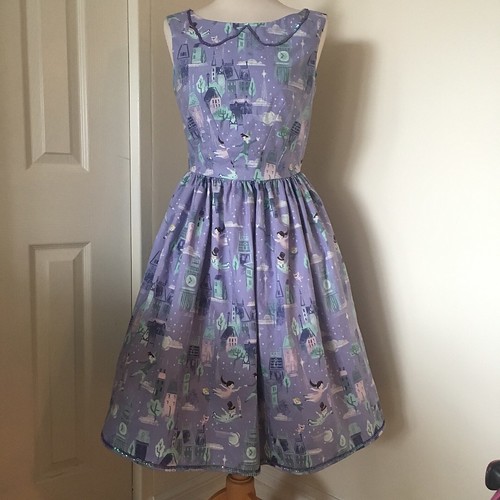 I don't feel as though I managed my time very wisely this past weekend: I spent most of it in bed with a sickness bug, which put paid to all of my weekend plans (sorry, Parkrun!). I'm feeling a little brighter now and in between naps I managed a sum total of six chapters to finish the book I'd been reading (see tomorrow's post!), four rows of knitting and the finishing touches of this dress. Not as productive a weekend as hoped, but what can you do?

I'm back in the throes of a love affair with my trusty Simplicity 2444. At one point in dressmaking I felt as though that particular pattern was almost something of a cuss-word, it was so so common. But, I love the shape and have been reaching for my older versions of these dresses lately, so it seemed right to make some more. I finished a polar bear print one a couple of weeks back, too.

I've been on a fabric ban so far this year (actually, an everything ban - no new anything until after we move. Not that there's a date for that yet, but still..) but I have *so*much to work my way through, even after sending a big package off to my friends' Brownie unit to use, and another big bag of scraps off to my sister. The stash looks a little tidier, but there still doesn't seem to be enough time in the day to make everything I'd like to.

Anyhow, this particular fabric arrived back in November. Despite not being one of those Disney-obsessed people, I was reeeally drawn to both the background colour and the cartoonish, pastel hues of this Peter Pan print. Since I spend most of my Mondays and Wednesdays answering to being called Tinkerbell, it only seemed right that this should become a dress.

Settling on 2444 was the easy part, I guess, and I cut the pieces out a while ago. I've been stalling over what to do about the collar. I'd wanted to do some kind of Peter Pan collar, because I thought that would be kinda cute, but having already decided it was going to have pockets, the off-cuts I had left didn't have the best parts of the print on them, and although I could have just about managed a couple of collar pieces from them, I didn't like how they'd sit.

In the end, I raided a jar of trims which I've collected over the past few years and came up with these purple sequins which seemed to match the print rather perfectly. I hand-stitched a collar outline to the top of the bodice (I know the photo might not look like it, but they're even and I did use a template piece), and also had enough left to go around the hem. Hand-stitching sequins turned out to be a relatively gentle activity, which I was able to  manage between naps on Saturday morning and endless episodes of The Animals of Farthing Wood.

The only thing left to do was decide what shoes / bag to wear with it... 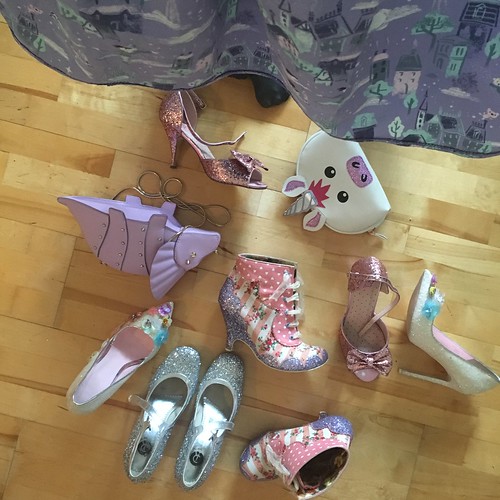