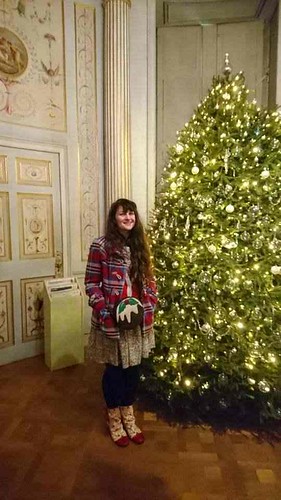 It's probably a little late for all of that Happy New Year jazz, now that everyone is back into their normal routines and Christmas has all but been forgotten, but here we are.

I also realise it's been a really long time since I wrote anything on here. And, to be honest, I've really missed it! At one point, when Flickr were being super difficult and deciding to charge for photo-hosting, I toyed with the idea of just deleting my entire blog, but I do like sharing things and have a lot of draft posts going with things I've made, finished or been up to, which I'd like to share, so it stays. For now at least.

So, what have we all been up to? Well, I had enough days off over the festive break that I was able to visit and/or entertain a lot of the important people. We had our own real (my first ever) Christmas tree* and it was lovely to get that pine-tree scent when we walked into the living room. (*our tree was not the tree in the photo - that was from a display at our local stately home!!)

I also had the chance to finish off a lot of projects - most of which were Christmas presents which I'd opted to make, then realised I was going to be pushed for time. Thankfully everything was finished in time (cue me literally sewing up a pair of baby booties as we arrived on the driveway of their recipients, but I guess they were technically finished before I made it through the door at least..!)

It's also been pretty nice to spend some time at home and get a few more decorating / finishing off / unpacking jobs done. It's starting to feel a lot more homely than it has before, for which I am super thankful. My sewing room is almost ready to actually do some sewing in, and I can't wait to share some progress photos as we do things to each of the other rooms, too.

Other than that, I've done a little bit of thinking about goals and challenges for the year ahead and have already planned a couple of exciting things to look forward to - a weekend away with the THFC girls and a skiing trip. Yay. I think it's always good to have something to look forward to.

Do you have any goals for the year? I love a good excuse to set more challenges, and I'm a fan of resolutions, although I know they get a bad rep sometimes.
Posted by char at 15:53