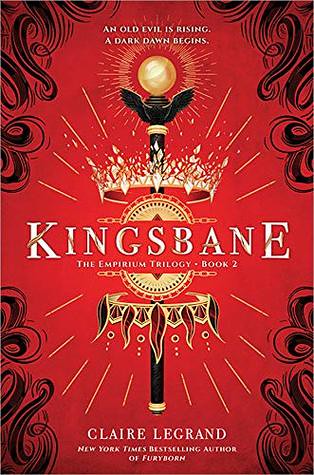 It's been such a while since I read something on schedule and took part in a book blog tour, but I'm getting back on track and this is an exciting tour to jump back onboard with.

Throw yourself into a world of queens, angels and kingdoms at war. Kingsbane is the long-awaiting sequel to Furyborn, the first in a trilogy of books billed as fiercely feminist fantasy. So, of course I was intrigued.

Kingsbane intensifies the legacy of Furyborn, building on the threat and thrills, lust and romances, whilst reigniting Claire Legrand as a trailblazing voice in the fantasy genre.

Rielle Dardenne has been anointed Sun Queen, but her trials are far from over. The Gate keeping the angels at bay is falling. To repair it, Rielle must collect the seven hidden castings of the saints. Meanwhile, to help her prince and love Audric protect Celdaria, Rielle must spy on the angel Corien—but his promises of freedom and power may prove too tempting to resist. Centuries later, Eliana Ferracora grapples with her new reality: She is the Sun Queen, humanity's long-awaited saviour. But fear of corruption—fear of becoming another Rielle—keeps Eliana's power dangerous and unpredictable. Hunted by all, racing against time to save her dying friend Navi, Eliana must decide how to wear a crown she never wanted by embracing her mother's power or rejecting it forever.

The pace is fast and each chapter pinballs back and forth between the queens: Eliana and Rielle. We know that they are living hundreds of years apart and yet that there's a strong connection between the two of them, and the book unravels this connection neatly by the end. I'd hoped for a little more progression between their worlds, which seemed to jump between centuries and yet be described very similarly, but I think that's just me being a little picky.

There's a lot of magic at force in this series and some incredibly strong characters - my only flaw is with Rielle, who we know has abundant magical power, and yet seems to turn to jelly when her beau, Prince Audric is around. Having said that, I love the dynamic between these two and Ludivine and the way that they played off one another.

There are a couple of characters in here who I loved to hate as well (Simon, Corien) and some downright evil behaviour - it's funny how people's behaviour can be so driven by greed and their longing for power.

But, time is running out and Rielle has some huge decisions to make which could change her life forever: the Gate which is holding back the Angels (not good) is beginning to fall and it's up to her to protect her kingdom.

If you can bear to fall deep into this world, Kingsbane is available today. 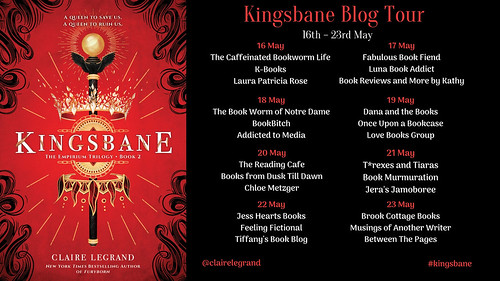