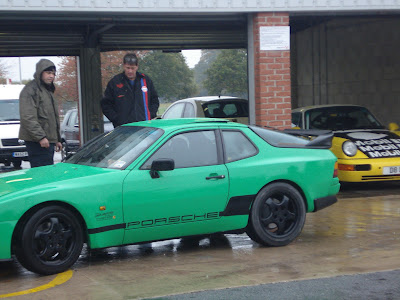 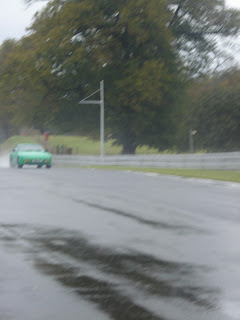 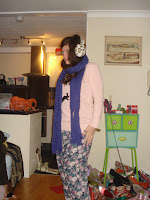 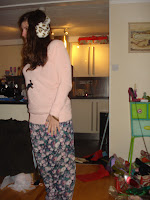 on tuesday, i had a long-awaited day off work, and accompanied my dad and some of his friends to Oulton Park for a Porsche track day..perfectly timed by the weather, it seems to have been the only rainy day this week, and whilst we were there, the rain only stopped for a short while over lunchtime..typical!
i think my dad is definitely the reason i've always been fairly into cars (for a girl, anyway)..i've been with him to plenty of car events and race days over the years, and he's always had an impressive garage-ful..my favourites were the ferraris, but he's moved onto porsches now, and  has quite a collection now.. 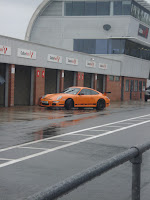 the track day was run by Porsche Club gb and basically gives members a chance to bring their car, and run it round whichever racetrack they've hired for the day (obviously there are a few key rules - NO racing or timing, and let faster cars pass safely)..i was kinda amazed at how many members brought their brand new (Sept'10) cars, to drive them round at high speed on such a rainy day, but ho hum..dad left his pricey ones at home, and brought his bright green (recently sprayed by a friend with a slow week in the bodyshop!) ebay bargain 944, bid on after a few drinks (pictured above)..it's had a lot done to it over the yr or so he's had it, but even so, will never be worth the amount of some of the cars that folks were thrashing around!! one guy had driven his relatively new GT3 several hundred miles to the track, and spent all of lunchtime on the phone to the RAC as he'd been a bit over-zealous with it and managed to wear out a seal or something, resulting in a puddle of coolant under the car, and no way for him to get home! 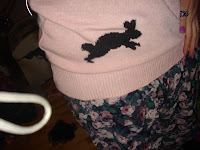 we brought ours on a trailer, obviously hopefully we wouldn't *need* to use it, but you never know..despite the weather, we spent a few hours putting in plenty of laps, and the car definitely performs a lot better after it's recent improvements - there's still some work to do, but i guess it's an ongoing hobby - and it helps that some of his best mates are porsche mechanics (hence the trailer etc)..it was a fun day, and we didn't notice the rain that much..
as for my outfit, a 6am start, and a chilly, rainy morning..i went with the warehouse floral trousers i wore at the weekend, over a pair of thick tights, and with my plum coloured pixie boots from primark..a couple of vests, and this thick jumper with rabbits printed on it, also from primark..i wore the ear muffs i'd found in the urban outfitters sale in liverpool for the first time, and totally needed them (except for when i was wearing a crash helmet)..and added coat, scarf and mittens..my toes got cold, but other than that it seemed to be suitable attire..
Posted by char at 10:16