look at the stars, look how they shine for you.. 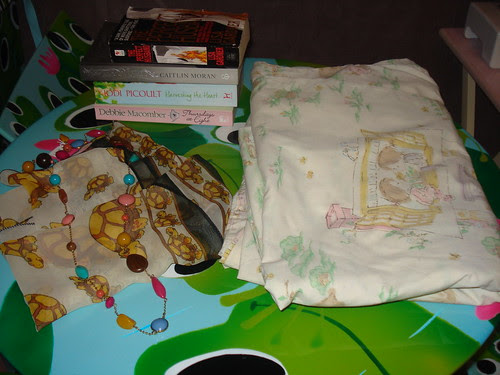 finally the hunt for a plain black pencil skirt is over! i've been looking for one for quite a while, but seemed to be between sizes with the ones i tried in matalan..as we were trying a few other things on, i decided i may as well give this one a go in dorothy perkins, and was glad i did..i spent some of the vouchers i cashed in from various survey sites, and combined with the in-store 'buy one item get the second half-prince' promotion that was running, i thought it was a good bargain..

i have been saving this top for a plain black skirt for a while, waiting to find one i liked, so thought it only fair that i wore them today, along with some black glitter heels which i picked up in a charity shop in a panic a few days before my graduation as i didn't own anything black and 'plain' to meet with the requirements of the service - they've done me well!

speaking of charity shop bargains, alex and i couldn't resist a little tour around the ones in town yesterday, and this is what i came home with - various books to read (£6.24 in total) (and no doubt feature in a future 'tuesday titles' post), a TURTLE print scarf (£6) (rather excited about that!) and a cute and colourful necklace (£2.99)..most excited about this duvet cover set, which i initially thought would make something lovely if hacked up and sewn back together, but given the size of it, i may even use it on my bed ! (£3) it's been quite a while since i had looked in the charity shops in town - i don't seem to have had the time to wander into town for a meander recently, so it was rather nice to take everything in at a nice, slow pace after we had crossed everything off the list..

have you had any good bargains recently?
Posted by char at 15:49