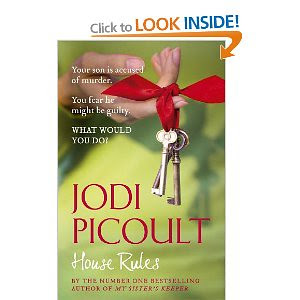 ﻿
'﻿House Rules' by Jodi Picoult
as you'll have no doubt gathered from previous reviews, i'm a fan of Jodi Picoult..i've never picked up one of her titles and finished it with a sense of disappointment, and this book was not an exception..

as with any of her books, House Rules deals with issues which one would not necessarily come to expect from the 'women's fiction' section of your local library..the main character, Jacob, suffers from Asperger's Syndrome - a disorder which, before reading this i didn't know much about..{one thing you can't argue about Picoult is that she does seem to do her homework; by the time i reached the end of the novel, i felt as though i had devoured so much information about Asperger's Syndrome that reading the book would have been worth my while even if i hadn't enjoyed it}..the descriptions of the family characters' lives and how they have been / are constantly affected by Jacob are written in a way which makes them easy to relate to, even for someone who has not had any exposure to an 'Aspie' - i particularly admired the way in which Picoult wrote about how hard Jacob's father had found it to face up to having a disabled child..i guess i can't really say how accurate the information is, but i have read some reviews from people who have a day-to-day contact with the disorder, and have summised that the information presented on Asperger's is correct..

without giving too much of the plot away, Jacob is put into a trial situation; certainly not his usual routine, which is a big deal for someone with Asperger's and therefore difficult to cope with..in addition, the key traits of his disorder are the very traits which are making the police, and potentially the jury who are hearing the case, think that Jacob could be guilty of the crime he is accused of..

that said, i wasn't disappointed by the book, and would search out others by Jodi Picoult.. 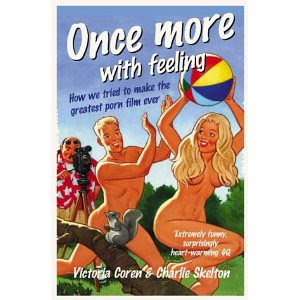 and now for something a little bit different to both what i would usually choose to read, and to what i would expect to enjoy..'Once more, with feeling' by Victoria Coren and Charlie Skelton

the book also touches upon, (again, perhaps obviously given the subject matter) briefly, the moral issues surrounding those working in the industry, although this certainly is not the backbone to the story in any way, and not the title to choose should you be looking for a well-measured argument on the issue..