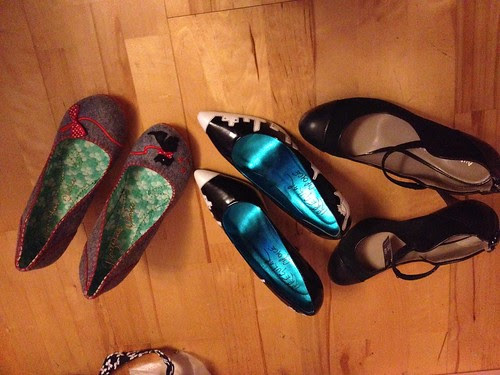 I tell you, it's been a damn good week for shoes, this week! This has sort of just about made up for the fact that the rest of the week has been one of those annoyingly hectic sorts, where you get to the end of it and wonder why you hadn't managed to get more done. Weeks like this can be so annoying, especially when I have so much to do before the dreaded festive season descends.

Anyway, onto the shoes. All via ebay, but I've managed to add to my Irregular Choice collection. The scotty dog ones look brand new, which I hadn't been expecting. I have this style in the green version already, but they really are one of the most comfortable styles of heels I've known. I almost bagged myself a pair of the black version as well this week, but forgot to bid.

The middle pair I have to admit I was most excited about - I've been on the lookout for a pair of these IC New York Skyline heels for quite a number of years, but have never managed to spot a pair in the right colour or size, until a few weeks ago. I'd almost given up hope of them arriving, so was pleasantly surprised when they did and am quite certain I like them better than the new, more rounded model they've brought out recently.

The third pair may not look it in the photo but is actually that fab dark green colour which I seem to be more and more drawn to, of late. Theyr'e a mixture of suede and leather and they zip at the back, so I'm hoping I have more luck with them than those Primark boots earlier in the week. They're originally M&S Limited Collection so I think they should be better quality, though.