when they come for me, i'll be sitting at my desk, with a gun in my hand, wearing a bulletproof vest.. 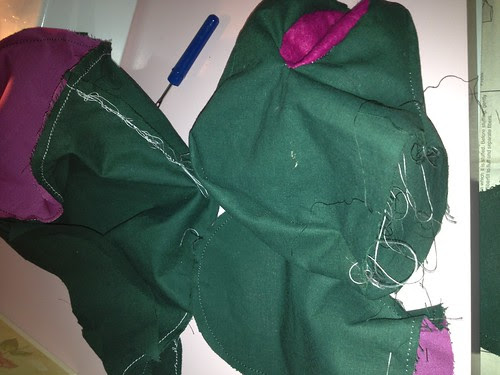 I've been conscious this month that my 12 in 12 sewing project wasn't going to get a lot of time. With a Guides' sleepover coming up this weekend (as well as another dentist appointment) and then a trip to London next week with a group of Rangers, I'm not getting a lot of sewing time. I was having a search through for some elastic the other day and came across a pile of pieces which I'd been planning to make into a dinosaur. I must have cut them out a couple of years ago, and had handstitched the head section together. Not very neatly, though so my first step at the weekend was to take those apart and start again. It's almost finished now (this photo was taken on Sunday and I did a little more when I got home last night) - all I'll need to do now is fill with stuffing and have a think about some eyes. 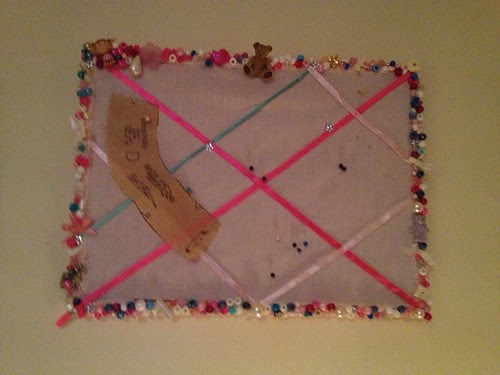 Another recent 'make' is this pinboard, rescued from it's "skip" destiny during my recent office move and attacked by my new glue gun (which at £3.99 from HomeBargains, was quite a good buy -I need to learn to be a bit neater with my glue application, but will work on that). I covered it in some spare fabric and then glued as many beads and things around the frame as I could possibly fit on it. It's a bit of a disappointment in that the fabric isn't as thick as I would have liked, but once I've pinned a few things on there it shouldn't show too much. I've got another, larger board as well which is waiting to be covered.

Have you made anything recently?
Posted by char at 17:01