three cheers for the tyranny.. 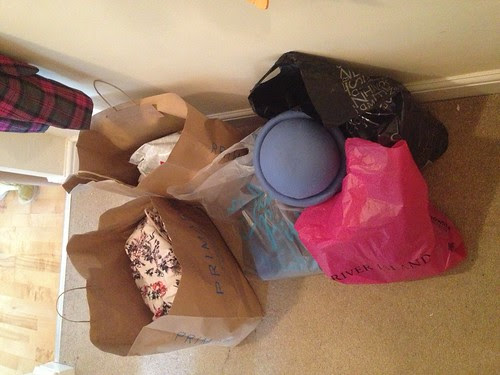 This week has been speeding by, without much time to even think, let alone do any of the things I've been meaning to.

It's been a funny start to the week, I suppose. After a couple of busy days at work, I spent last  night at a presentation of my Queen's Guide Award, which I've spent the past couple of years working on. I'm waiting for some photos to come through of both the venue and the presentation itsel, but had a lovely evening celebrating with some of the people who have helped me to achieve the award, as well as some of my guides and rangers.

After the tea party, I went with a couple of friends for some dinner, and finally arrived home about 10.30 to make a start on some of the things on my perpetual to do list. Once I'd got the silly things like reading the electricity meters, emptying the dishwasher and sewing a button back on to a coat which has been sitting around waiting for a while out of the way, I was ready for bed. But as usual, lately, I couldn't sleep.

A couple of hours later, I finally gave up and got back up in an attempt to make the most of my time and took my chance to unpack the things I bought on Saturday in Leeds, which had been sat around in their bags in the hallway since I got home.

I'd not really planned to buy anything from the H! range at Debenhams. Although I'm a fan of their quirkly prints, I have found the dresses to be quite short in previous collections, so when I popped in to have a look at the panda print dress Sarah had texted me about, I wasn't sure it would be for me. Having tried it on, though, it seems quite a wearable length, and I really was taken with the print, so I decided to take advantage of their promotion and buy it. And the jumper. And the coat.

A quick tour of the vintage shops in and around the Corn Exchange managed to satisfy my recent desire for leather skirts, as well as discovering a rather pretty daisy necklace. And I think I was mainly drawn in by texture, rather than the quirky printed items I usually beeline towards when I'm shopping. The mint top from Dorothy Perkins has a really pretty bow and cut out detail on the back which I think will work nicely with a pencil skirt.

The majority of my purchases were from Primark, but I did try to be more sensible than usual when I was shopping in there. I've been trying to focus on things which I'll actually wear, rather than picking up oodles of items in every colour, just because they're cheap. I think that clearing out my wardrobes a bit recently has given me a chance to consider the things I actually need.


After a couple of hours, I'd managed to unpack everything and put it away after thinking of a few outfit ideas for it all. I still didn't manage a lot of sleep but at least it was something else done. I've been struggling with my sleeping for a little while now and have been wondering about heading to the doctors about it. Again. I'm not really a fan of my doctors as I've so often felt dismissed by them, but I've been prescribed sleeping tablets on a few occasions in the past, as sleeping problems have been an ongoing issue for me. I do try only to use them as a last resort. The other thing I've wondered about is trying an online chemist. Has anyone used one and if so, would you recommend it? If you have any tips for sleeping better, I'd love to hear them.
Posted by char at 12:59