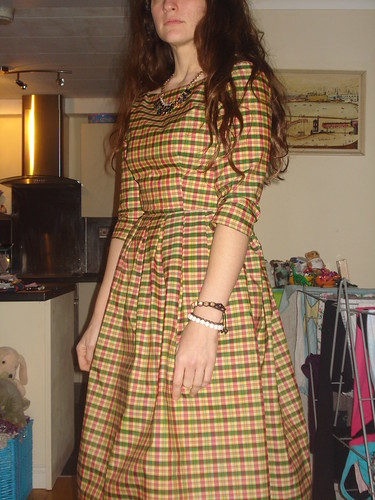 I went to watch The Nutcracker last weekend at the local theatre. I can't believe I'd not known it was going to be on; I obviously haven't checked the listings in a little while, but as soon as I realised I managed to secure myself one of the last tickets. I've only seen a couple of ballets so far, but The Nutcracker is one I'd always hoped to see.

I do like to dress up for the theatre, and this gave me an opportunity to wear my new Tara Starlet Marina dress. Sarah and I both decided we couldn't resist this dress and ordered it at the same time (sadly we missed the opportunity of taking a dress-twins photo, oops). This dress is really low cut at the back (so much so that I had to go with one of those pesky stick-on-cup bra things, which are always a nightmare. Sarah had hers shortened and used some of the excess fabric to fill in the gap at the back, but I quite like the contrast between the long sleeves and the low back, though.

I also couldn't resist an opportunity to wear one of my new Matalan necklaces, which I thought went with the colours in the dress quite nicely.

I felt all dressed up like a little kid going to a birthday party; I'm sure I had something similar to this dress with it's big poofy skirt and party fabric. I am pleased with it, and the measurements on this one are true to size. I'm not impressed by the fact that they seem to send all of their orders out by 2nd class post. Maybe it's just me, but if your dress costs more than £100, surely you'd be posting it using a slightly better service?

It's possible that this is just last night's really grumpy mood continuing. I wasn't very happy to get a phone call last night asking me to do something about the chalk marks which the guides had left on the walls and playground of the hut we'd stayed at several weekends ago (before I came home to the flooded flat), and to do it before Friday. Someone had mentioned them, but saying that "they'd taken a while to get rid of, so could you ask them not to do it again", which had made me think they'd been cleaned off. I'm not sure when I'm going to have time to do this as this is already a more-busy-than-usual week.