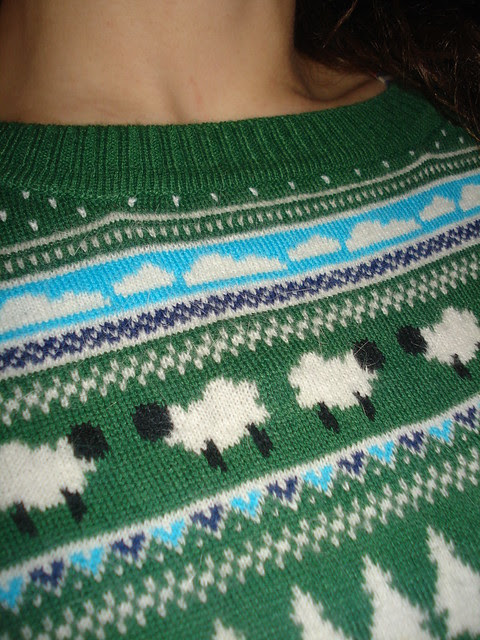 I'm not sure how festive this one scores in the Christmas jumper stakes, but it's fairly wintry and it goes with my shoes, today and I hadn't worn it yet, so wanted to give it a try, and now will be linking it up to this campaign which I've discovered Westfield are running for Save the Children.

I really liked this jumper when I bought it in Leeds, and yet, since then I haven't worn it. I think that sometimes I seem to go through phases. Likewise, when they first arrived I wasn't so sure about these chaussures. But rediscovering those this morning made me think about just how tinselly they are. Maybe I am getting sucked into this "Christmas spirit" thing, after all...?

An anonymous comment on yesterday's post got me thinking quite a bit about blogging and "bragging". Apparently, my posts about my shoe purchases come across that way, which I have to say, I've never intended. I guess the whole concept of "I bought this and wanted to share information about it" could be considered a bit materialistic, bu is it any different to posting pictures of anything on blogs, Twitter, Facebook, Instagram etc? (I've left Pinterest off that list as I suppose that one is more about "I've seen this photo and want / like it" with other people's photos).

There is a school of thought which would suggest that the whole posting photos of your outfits, buys, new make up etc thing is bragging. But doesn't all of that fall under this new umbrella of "sharing". Instagram is fondly known as the app for sharing photos of your dinner. Brands encourage us to share things, to get their products covering a wider area and a lot of brands seem to be doing this well - i.e seeing results based on sharing a lot of things, a lot of times.

I'm not entirely sure how the Facebook thing works, but isn't that all about "sharing links", so that other people can read or watch what you've just seen or enjoyed, as well?

Is blogging, then just another form of sharing things? Is it different because it's about a blogger sharing what they have / like / saw, instead of a brand or magazine or a celebrity doing it via Twitter?

Personally, if I've snapped up a bargain, or seen a good offer, or a pretty dress, I like to write about it here and share with other people who may also like to take advantage of the same thing. I kind of (and I'm not sure if this is naive of me - perhaps it is) assume that the type of people who read my blog, which makes no secret of the fact that it's about clothes, shoes, outfits, and a few of the other things which make up my lifestyle, would be the sort of people who would enjoy those things.

If not, fair enough, but what brought them there in the first place? I don't advertise my blog anywhere (other than posting links to new posts on Twitter, sometimes) and so I'm not assuming that many people would read it, if they don't share a common interest. I get a lot of search results from people looking for keywords of shoe or clothes brands, so I can see that they would share a common interest, and perhaps they searched a particular model of shoe because they wanted to find out some more about it, or see photos of how it looks on, before they buy it, or whatever.

In short, I'm not put off by the comment. I haven't really taken it to heart, other than as a bit of a thinking point. I like to shop. I like to find new brands, and new products and if I want to spend some of my hard-earned money on the things I like, then I think that's fair enough. I have never been in debt, never had a credit card and never spent money I haven't got, as that's something which I wouldn't be comfortable with (despite the fact that society would suggest that puts me in the minority).

I don't therefore feel that I have to justify myself to anyone and will continue to post about the things I like, have bought, or wish for, as I always have. In the same way as I'd never judge anyone who liked make up or to post about beauty products, as that's not something which particularly interests me, I wouldn't expect to be judged for the things I like. I don't drink, smoke, or have any other particularly expensive habits. And at least shoes give you something tangible at the end of it.
Posted by char at 13:15