And sing for the wings of a dove.. 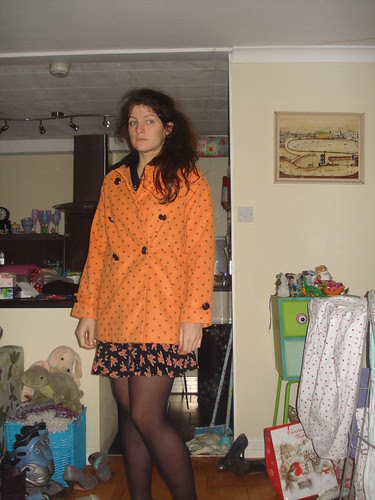 I'm sure I've mentioned this before but have you ever seen something which was already sold out, and then tried to find it on eBay every once in a while? It's great when you manage to track it down, and this dress was one of those things for me. I'd seen it online, but not until it seemed to be sold out everywhere, no local Debenhams stores had it and I just had to file it to the back of my mind, with other things which have eluded me over the years.

Luckily, one came up on eBay in my size recently and no other bids on it, which meant it was on it's way to me for a really good price. I love the print, and had been worried about how short it would be, as that's my main problem with H! dresses. I've no idea who they think they're designing them for. This one isn't as bad as I'd expected, though.

Tortoise update: The vet has given me some antibiotics for her, which should sort out the respiratory infection she's got. It's quite sad as she clearly doesn't like having the injections, but I know they'll work, so have to do them. It sounds as though the cause has probably been the damp following the flood.