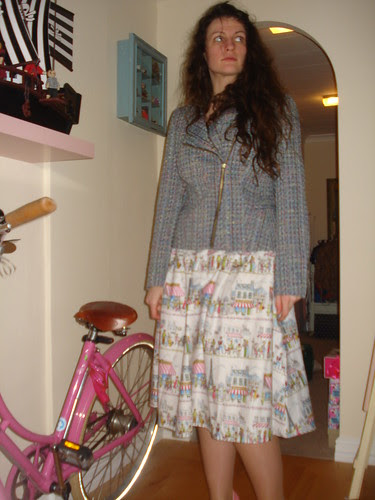 One of the most frustrating (but not really) things about having talented sewing friends is that sometimes they make things which you really, really want to add to your wardrobe, but of course you can't.

When Roisin made herself the Nana dress, inspired by a Bernie Dexter beauty, I totally fell for it. However, after buying one Bernie Dexter dress before Xmas, I wasn't overly impressed with the quality for the price (they seem to retail for about £120 if you can get one in this country!) so I was definitely sure I would prefer to make one than buy the Parisian Cafe dress. So much so that I'd got the Michael Miller Paris Ville fabric bookmarked and was in the process of looking for a pattern which would suit it, and then sort of...forgot about it for a little while (I do this often).

Fast forward a few weeks and I'm sent a link to a website I'd not heard of, and lo and behold there is the almost-exact-same dress on there. For what works out to be about £30, after a first-order discount. I ummed and ahhed because there was only a size L available. However, thinking about it a little longer, I decided that since I wouldn't be able to buy the fabric for £30, let alone the pattern as well, this would be a good deal even with the fact that I'd have to alter it.

It arrived rather quickly, really and although I've altered it, I probably need to take the bodice in a little more. Hence the jacket, which is something I picked up in the sale in F+F a while back, drawn to the mix of colour in the fabric and the asymmetric zip.

Having been neglected for a while after I'd bought them, these Topshop Glow heels have seen a lot of wear, lately. I ought to give another pair a chance, now.

Sewing update: another dress finished last night, which makes a total of 8 for me this year (and one for Little Sis, which I forgot to photograph). I'll just count my own, though.

What are your thoughts on cheaper versions of something? Would you still have made your own if you'd found something which would work out cheaper to buy?
Posted by char at 11:14