The day they paved the parking lot.. 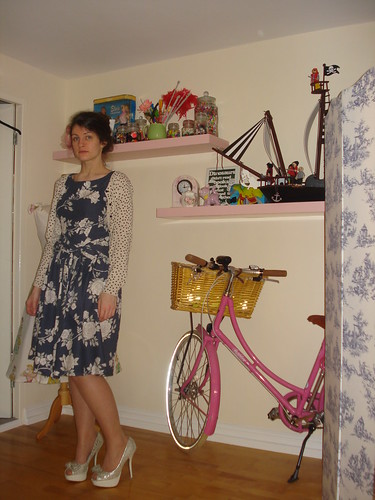 This is such a simple outfit for me, but I do really like the way this dress turned out. I've worn it a couple of times already, which considering I only made it on New Year's Day, is pretty good going for me. I'm often guilty of wearing things once and then forgetting about them.

These heels are a pair I've had for years - in fact, the receipt is still in the box with them, and apparently I bough them in 2006. They've seen a lot of wear over that time, so I guess that means they're up there with the best value pairs of shoes I've ever owned.

I'm trying to make an effort to improve my photos and to find a better photo location, hence all the different locations. I'd thought that this screen would be a cute background, but I'm not sure it's tall enough.  Hopefully, I'll manage to find time for camera-shopping this weekend, I think I have my heart sent on a Canon 1100D, which seems to be one which a lot of people have recommended to me.

In giveaway news, thank you so much to everyone who entered the Bonne Chance giveaway. That's now ended and I can announce that the lucky winner is: Hannah (@cutesandfruits). I've got another giveaway idea; I'm just waiting for the prize to be delivered to me, so watch this space!
Posted by char at 08:30