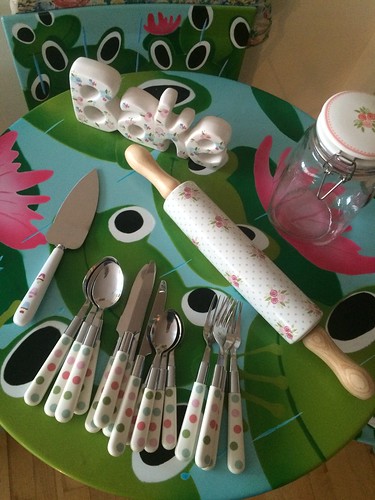 Last week I popped into Dunelm on a lunch break because I wanted to get myself a crochet hook, before my crochet day with Becks. I came out with not only a crochet hook, but quite a number of pretty homeware items as well. Oops. So much for a homeware shopping ban until I have a new house. But here's what I bought.

I think the one thing I'm most excited about is the rolling pin. I've always wanted a proper vintage-style ceramic rolling pin; there's just something so stately home about them. For me they conjure up images of Cook in a Downton style kitchen, rolling pastry for that evening's dinner. I've already put it to good use rolling the icing for this cake.

Obviously, I didn't stick to just one collection. My existing homeware collection is a bit of a mis-match of colours and designs. I don't think I own more than two the same of any item. So dinner parties for six are a bit of a hilarious mixture. But that's what I like. And I really liked this BAKE ornament. I have a little glass shelf in the kitchen where I keep my prettiest glasses and measuring cups etc and it's going to find a spot there to reside.

I also treated myself to a new set of cutlery because the ones I bought from Ikea when I moved in are really on their last legs, with the colour rubbing off the handles etc. I prefer chunky handles to just metal and thought the colours would go with most of my crockery. Ish. And a cake slice, just because.


Lately I seem to be gradually building up a collection of cute storage jars. Again, I've got a mish-mash of this sort of thing for storing dry store cupboard essentials like rice, pasta and sugar.

I also picked up four of these cute cushion pads to go on my dining chairs as my previous ones had been getting a bit tatty. I forgot to take a photo of them, though.

I rarely remember to go to Dunelm but I'm always impressed when I do. Have you picked up any bargains from there lately?
Posted by char at 08:30