Help me up, let's keep on running.. 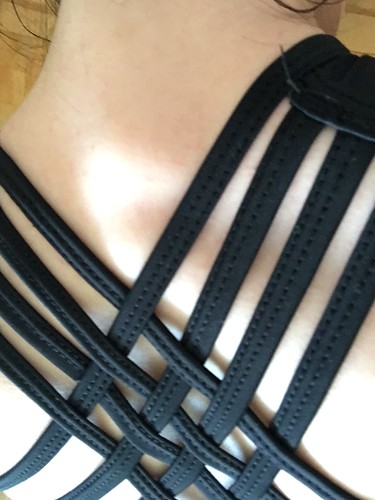 I fear this post might be a bit of a jumble, because it's something of an outpouring of the jumble of thoughts in my head. So, apologies in advance for that.

Sparked by a conversation I had with one of my favourite gym buddies this morning as we were stretching after our workout, I was thinking (when am I not?!) about my ongoing weight loss battle, my size and my shape.

I don't remember a time when I've ever felt happy with the way I looked. I can't recall looking into a mirror or at any photo of myself and having any thought which did not begin "oh, I hate...". I sometimes feel as though this isn't quite right, but I also know that people say that they also have concerns about their bodies and so I just pass it off as normal. But I'm not sure that it is.

I go to the gym probably twelve times per week. I swim, run, lift weights and go to a number of different exercise classes. But it's never enough. I said this to M this morning and he asked me "what would be enough for you?" And aside from the obvious, which is that I would like to lose weight, be skinny, feel confident about myself, the truth is that I don't know. Nor am I quite sure how or where to start figuring that out.

It almost feels a little like treading water. Wading through treacle. All of those inexplicable ways in which they explain those things you struggle to progress with. It's like there's a little demon inside my brain eating away at everything that I should be entitled to feel proud about, because it isn't enough. It's been living in there for at least the last fifteen years and has become part of the furniture.

The little victories, the tiny steps forward I take towards the ultimate goal? They get lost in the treacle. Instead of being celebrated, they're shrugged off and dismissed without time to even properly process. In the past I've told myself I want to progress to do a chin-up, to squat 100KG, to run a Parkrun, to lose an inch from my waist. I've done all of these and yet, I still feel lost and fail to accept that actually, I'm doing okay. This morning I stepped on the scales to find I'd lost a kilo and instead of being pleased, just thought "well, it's not enough". And I kind of hate myself for thinking like that.

I don't think this is necessarily an issue which is confined to fitness stuff, either. I'm hopeless at taking compliments (I just get embarrassed and shrug things off) and fail to recognise things in myself which I'd see as achievements if done by others. Weird, no?

I've had a lot of comments in the past (both online in response to posts I've written) and in person, from people saying it's hard to believe that I have such lack of confidence in my body image, when I wear such colourful outfits and post photos of myself. There's a little part of me which at one point hoped that in doing that, I'd feel better about myself in the long run, at least by getting more used to it (this is the same approach I take towards running, which I detest). I'm not sure it works, but maybe one day it will. My outfit posts have always been just that to me - records of my outfits; nothing more.

I don't know what the answer is. Or rather, I do but I don't know how to get there. M tells me that he's spent a long time feeling the same in terms of body confidence, before he realised that he just had to accept his lot and make the most of it. He tells me that he looks at other people of his age and that helps to serve as a reminder to him that he's doing okay in the gym, and at least he's doing something. Which I guess is a good point. But, we're not sure how to get to that lightbulb moment.

Is that how it works? One day I might just wake up and feel okay with myself? Feel as though I've made it to that mirage of a finish line which has been evading me for so long? I'm not sure I'm convinced. But I'm not sure how else to go about it, either. I don't think there's an answer - I have no happy ending paragraph for this post other than the whisper of hope that maybe one day I'll get there and things will be I will be enough.