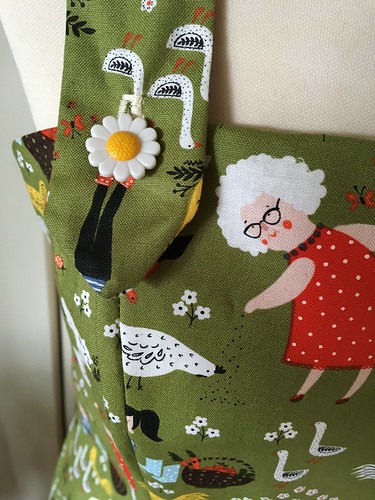 For the first time in what seems like forever, I had a weekend to myself. It was epic. I was able to sit back and relax, kind of. Well, my style of sitting back and relaxing starts with a long and very detailed list of things I need and want to do. So, I mostly filled my weekend with housework (it's been far too long since I was actually at home for more than just ten minutes at a time, so there was a lot to catch up on), running, allotmenting, baking and managed to find time to fit in a little sewing. 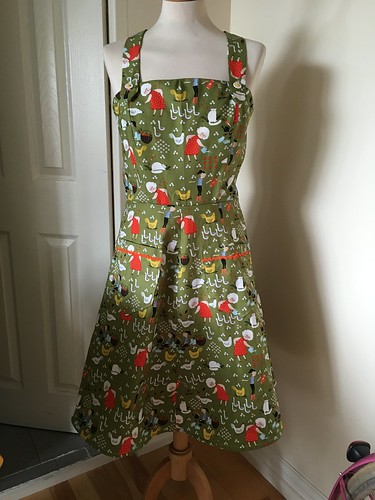 I've made this pattern up before, but I'm not sure if I really said a lot about it (the post is here, I didn't) and I've worn that dress only a handful of times since I made it, and yet for some reason, as soon as I saw this fabric online, an image of this pattern popped into my head and I couldn't imagine making anything else with it. I even ordered a roll of orange ricrac at the same time as I had envisaged finishing it off with that.

Checking back on my fabric stash post, I haven't really made much progress. I guess I hadn't counted on making a pair of shorts (both pattern and fabric purchased after that post was written, but they jumped the queue and I made them up this weekend). 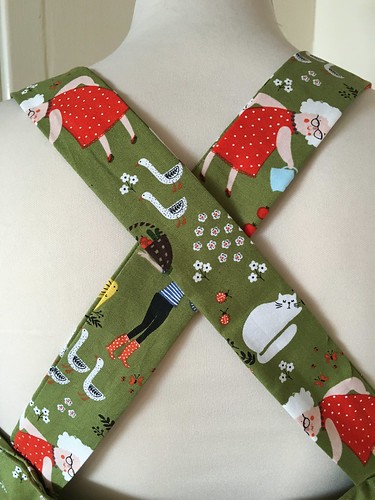 Anyhow, the pattern itself is Simplicity 6926 and is one I was given in a bundle from a Guide leader I know. I like the button back detail, although both times I've left off the ruffle at the hem as I think it makes it too 70s for my personal taste. I love crossover straps, and have made other dresses (this Simplicity 1194 springs to mind) with similar details because I find them cute.

The construction of the dress is pretty simple, and being fairly vintage in it's instructions calls for a lot of pinking and facings, which are fine by me. As always when I have cause to make buttonholes, I have to wonder why my machine will perform perfectly on a scrap piece of fabric and then insist on stuffing just about every other one up. I had to finish one of the buttonholes by hand and unpick/restart another, but that's not bad going to get twelve passable ones, I suppose.

The skirt is constructed in four pieces, so has a centre front join, which usually really irriates me, but I don't think it's that noticeable with this fabric. which is good. More often than not, I'll swap out a pieced skirt and add a gathered one instead to avoid centre front seams, as I'm lazy and don't like pattern-matching. 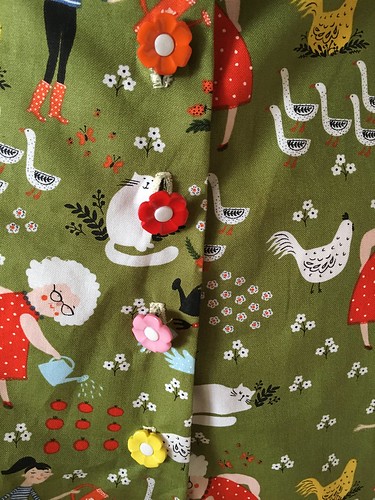 Even though the fabric is already pretty quirky, I decided to add the ricrac I bought to the tops of the pockets. I'd wondered about adding it to the neckline or the hem as well but this was before I rediscovered these flower buttons. These (along with some tulips, sunflowers and bees) were once stitched to a green Dorothy Perkins vest top, which I used to wear with jeans when I was at college, like a little 3D garden on my front. I got rid of the vests many moons ago but figured I'd be able to do something else with the buttons one day and here they are. I chose two daisies to button the front straps of the dress and then went for brightly coloured flowers down the back of the dress to close it - ten in total. I wondered if it was too much, but actually really like just about every aspect of how this dress turned out. Perfect for popping down to the allotment with the watering can, no?

Doing a little research on the pattern, I've found a lovely version here by Catherine. I love seeing other people's takes on the patterns I've used.