A lot of my evening meals (and lunches for that matter) follow a common theme, it has to be said. Chicken or fish, with some pasta or rice and some veggies - usually broccoli. Lately I've been adding a handful of spinach to just about everything (smoothies included) as I'm really struggling to retain my iron intake, so I'm working on an every little helps basis.

I've never really been that fussed about pasta, really. I do eat it, but it's one of those things I could easily take or leave. I don't really mind it, although recently I'm trying to lower the amount of carbs I consume, just a little, in the hope that it might get my metabolism moving a little as my weight-loss seems to have hit a bit of a standstill. 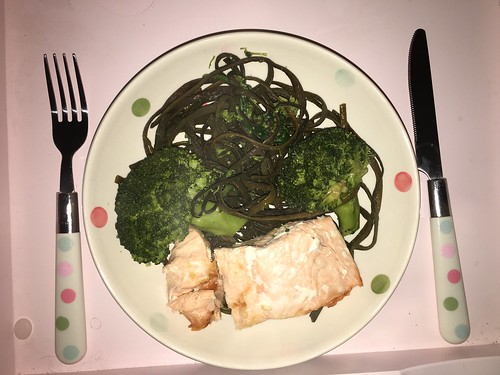 So, I was intrigued to hear about a new idea from Seamore. I Sea Pasta is a dried pasta alternative, made entirely from seaweed, so more fibre than carbs, and full of anti-oxidants.

Obviously there are a lot of pasta and rice alternatives about lately, with people using "cauliflower rice", "courgette spaghetti" and the like, but I've not come across any of these which are dried in the past, hence my intrigue.
To try it out, I decided to use it in a perfectly standard dinner, in place my usual pasta.

When I opened the bag, I got a whiff of seasidey-salt smell and was almost a little put off, which is odd because I *love* the sea. I added a handful of the sea pasta to a pan of boiling water and during the cooking process, it's colour changed from black to a dark green. When I drained it, it also seemed to have lost it's sea-watery odour, so that was good.

As for the taste? Well, I was pleasantly surprised. It doesn't really taste particularly green at all, if that makes sense... I can totally understand how someone, if it was eaten with a sauce or something would mistake it for actual tagliatelle.

I will definitely use this again in place of regular pasta - a little variety never hurt anyone.

Below is a puntastic little infographic which Seamore have produced to help outline the benefits of their sea pasta. My pasta was provided to me in exchange for an honest review.