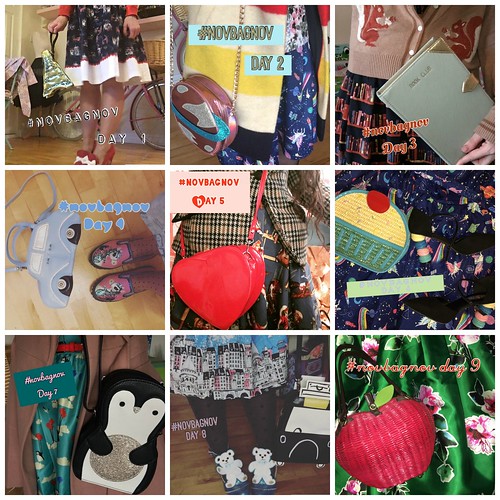 So, it's been a little while since I wrote a little round-up post like this, but as finding the courage to take proper outfit photos has been rather lacking this week, here's the first leg of this month's novelty bag challenge.

I've really been enjoying it so far - having more of a reason not to be lazy and just grab whatever's closest / I've used most recently and to actually think about what I would like best to combine with some of my favourite bags.

I've been shopping a lot of late, but with a focus on getting the last Christmas presents sorted, rather than particularly for things for myself, which my overflowing wardrobes would no doubt confirm is a good thing. Although some of these outfits are proving that I've a lot of things bought in recent months which I'm only just getting around to wearing for the first time. My new pink coat (day 7) has been languishing on the coat hooks for a few months now, but it's finally turned cold enough to wear it!

I unpacked the taxi and the cupcake bags from their storage boxes and was keen to use those as I hadn't for months. I know that some of the others - the penguin and the planet - have been worn a lot more recently. There are lots more to come! Also it's been rather lovely to have others getting involved - if you're on Instagram, join in with the #novbagnov hashtag...