Ethan is an exceptionally gifted young boy, obsessed with physics and astronomy.

His single mother Claire is fiercely protective of her brilliant, vulnerable son. But she can’t shield him forever from learning the truth about what happened to him when he was a baby; why Mark had to leave them all those years ago.
Now age twelve, Ethan is increasingly curious about his past, especially his father’s absence in his life.  When he intercepts a letter to Claire from Mark, he opens a lifetime of feelings that, like gravity, will pull the three together again.
Relativity is a tender and triumphant story about unbreakable bonds, irreversible acts, and testing the limits of love and forgiveness.

Oh goodness, where to even begin with this book. It's one of those which will stick with you after you've finished it.

Ethan is not an ordinary child. Being brought up by mother, he's never met his father and it eventually becomes clear why this is. The book is written in alternating chapters between the perspectives of Ethan and his parents, and I enjoyed the contrast between his differing outlook on the world with that of his mother and father.

I also really enjoyed the physics references, interwoven within the story. Coming from someone who wishes they knew more about science and physics and listens to just about anything Prof. Brian Cox ever presents in a hope of absorbing more information, I felt as though there is so much to learn and it put a lot into perspective for me.

Relativity is a book I'd implore you to read; it's just lovely. 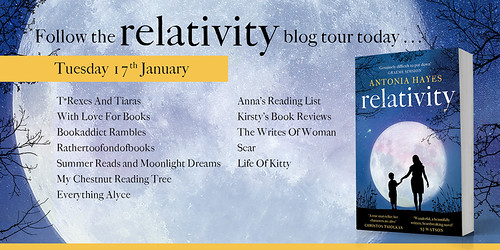 Find out what the other bloggers on the blog tour thought of Relativity.
Posted by char at 12:56