Way down deep where the shadows are heavy..


Back when we booked our trip to Paris, the four of us began putting together a list of the things we'd like to see and visit whilst we were there. It's kind of tricky, I guess, fitting in enough things to tick four people's list of wants off in just three days, but we didn't do badly at all. I didn't have a lot to add to the list. A combination of the fact that I've spent a fair amount of time sight-seeing in Paris, and am fairly easy-going when it comes to what we do, meaning I genuinely didn't have a preference when it came to things like Tour Eiffel vs Tour Montparnasse. But, the one thing I was desperate to fit into our itinerary was a visit to the Catacombs. 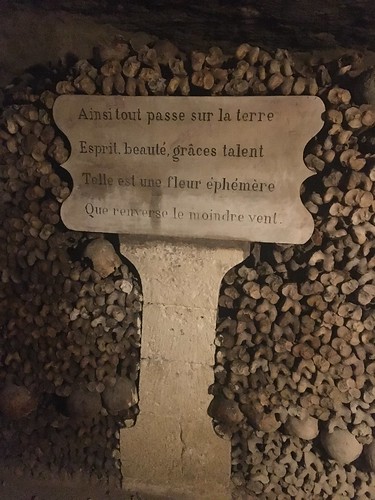 I'm not sure what it is that first provoked my intrigue, but ever since hearing about them, I was really excited about the notion of visiting these underground tunnels filled with bones. 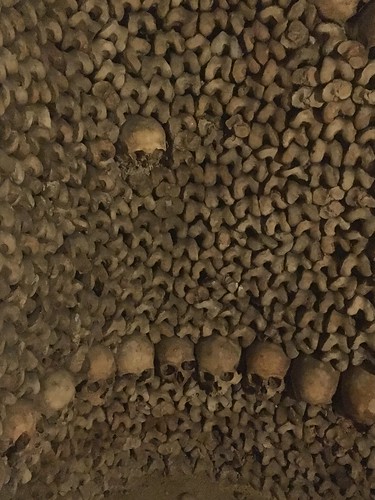 Lucy, in her ever-organised state had drawn up a plan based on our list and also booked some of the things we were doing online, in advance, because she's great like that. We therefore had a time-slot ticket and had to get in to the much shorter (we heard a group of Americans complaining that they'd been standing in the general admission queue for more than four hours, at one point!), timed tickets queue. I'd definitely recommend that if you're short on time, or just don't like waiting for things.

Once in, we were given tour-guide headsets and sent on our way down spiralling stairs, listening to the history of how this came to be. It's a long way down, and yet somehow didn't feel at all claustrophobic. 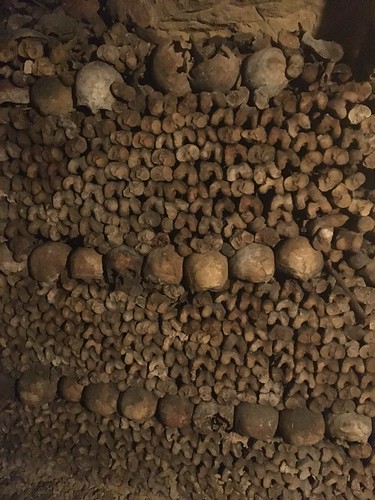 I'm sure I don't need to get into the depths of the history here, as there are much more useful sources of information than this, but these ossuaries basically came about when the cemeteries were overflowing in the 1700s and the remains of six million people were transferred into these purpose-built tunnels. They became something of a tourist attraction even from an early date and are still super popular, although very few of the actual tunnels are open to the public. I understand from locals that there are some other areas of the catacombs which *can* be accessed, and there was the suggestion that there's something of an underground cinema circuit, which I'd definitely have checked out had we had a little more time in the city. That said, since we've been back I've also read a news article about some people being stuck in the (non-public) tunnels and lost for several days, so perhaps it's not a good idea to go exploring... 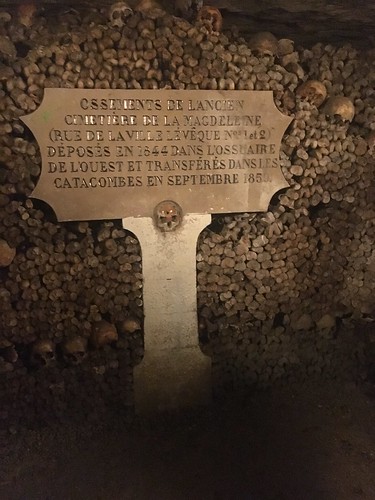 Once you're inside and have listened to the various recorded information tracks, you're free to move through the tunnels at your own pace. Despite there only being one tunnel to move through, and considering that there were so many people waiting to get in, it was miraculously free-roaming and not at all crowded: I was quite surprised. I was also kind of mesmerised by all of the pretty features, where some serious thought has gone into certain designs, such as the aptly named"barrel", below. 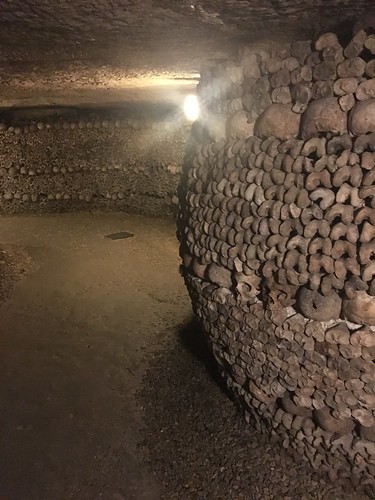 The tunnels are decorated using the tessellated bones of the bodies which were moved there, although there often needs to be repair work and some of the bone walls need to be rebuilt, due to the conditions leading to decay. In a macabre way, I found that the walls of bones were really beautiful. My inner emo kid was definitely in it's element. Particularly when it came to the verses and poems, carved and installed as part of some of the designs, too. References to short-lived flowers and death being a gain, just added to the wonderfully morbid feel eeriness vibe, in my opinion. 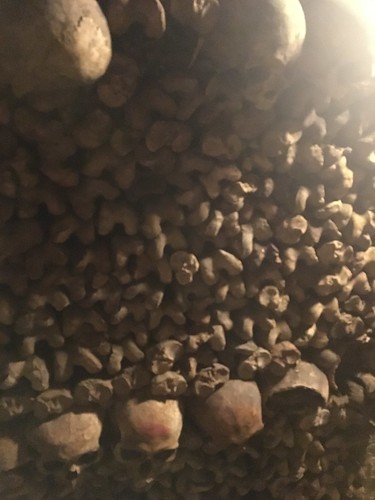 I was super pleased that we managed to fit this into our schedule and I really enjoyed it. We probably spent about 90 minutes there in total. although you can spend as much or as little time as you want to, making your way through the tunnels to the exit. Where, much to my amusement, everyone's bags were checked again. Just in case you'd squirreled away one of the bones.
Posted by char at 15:22