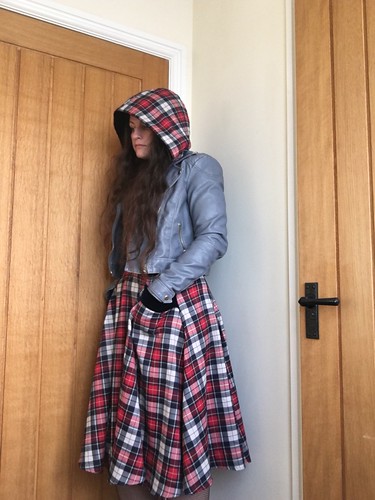 I'm conscious that things have been fairly quiet around here lately and whilst this is more of an acknowledgment than an apology (I'm not even sure how many people actually read blogs anymore tbh...) it's been something I've been meaning to get back around to. I have lists and lists of ideas for posts and things I'd like to write about. What I don't seem to have a lot of lately, is time. There's also a big part of me which hates saying that, as I'm increasingly conscious of the fact that *not having enough time* has almost become something of a competitive sport, and I also think I could resolve this by changing priorities and/or being more organised and/or agreeing to take on fewer things.﻿

Being in something of a weird headspace lately, I've been feeling less and less happy about clothes and outfits and just about anything relating to my body image / self-confidence. So, I've been less inclined to share outfit posts I guess. But, in an attempt to snap out of these thoughts, here's a dress which I bought in the Collectif sale at the start of the year and have barely worn, but kind of love for the hood, which feels like a big hug. Helpful when temperatures in the office reach parky.

﻿﻿
﻿﻿
Something which I have been loving lately is trying to find present ideas (yes, the dreaded C word has begun) which are new and different and in doing so, I stumbled upon Eilidh's Instagram account. She's raising money for a world trip next year by selling these little miniature people brooches and has been coming up with some awesome ideas. Not only can she make mini-versions of you (see mine above), but also mermaids, super-heroes and just about anything else once can think of. I love them and they'll be winging their way to some of my gift recipients this year, too.
﻿
﻿
What's better when you're feeling a bit down than donning a pair of shoes which you love..? Although there are quite a few pairs I've been mulling over lately, I've not actually added to my shoe collection in quite some time.. This could have something to do with the fact that I'm running out of space on the shoes shelves, but also that I do have a lot of pairs which just don't get enough wear as it is. These Cherry Deer heels are great since they were sent back to be stretched (they'd been size-labelled wrongly to begin with, IC think) but since then they've been great and are super comfortable! The only thing being that people do tend to stop to comment on them.

Aside from my ongoing body battles, all other aspects of life are very good of late. I have another lovely weekend to look forward to with one of my favourite people and things are, in all respects, pretty good.