Tiptoe through the tulips..

It's been a while since I had something new drop through the door. I mean, I know that's the whole point of having a spending ban in place (and I keep telling myself that it will all be worth it in the end!) but still. It made a nice change to unwrap something new and know I'd have to put a pretty outfit together to show it off.


The skirt is from 405Story; purveyors of bold prints and classic styles, who take their inspiration from the Californian coast. This tulip print appealed to me because of it's bright colour and retro vibe. The mix of bright colours makes me think it's going to be easy to style with lots of items - I've visions of pairing it with my trusty red cable knit jumper in the colder weather, too. 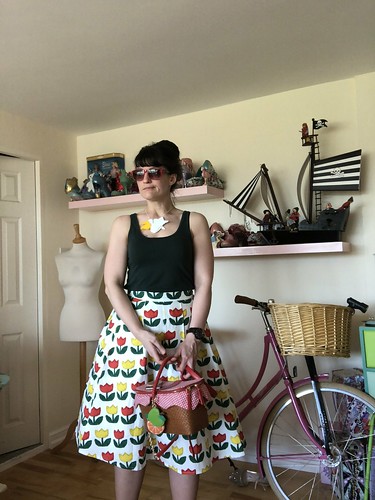 As it happened, the weather on Thursday rather played a part in deciding how to style this pretty tulip print. It was just too warm for anything other than bare arms (cue this bottle green vest top) and bare legs.

I picked out these shoes because I liked the idea of throwing in a contrasting print in the red stripes, and the gingham on this picnic basket bag as well, just added to the mix.

This pelican necklace, too, is something which I only tend to wear when the sun is shining. I'm not sure whether it's because it has beach-like connotations, or what. But it's bright, and cheerful, and seems to be a major talking point when out and about and completing menial tasks like posting parcels and wandering around the supermarket.. I love the little fish on a chain, which fits into the mouth (beak?) or the pelican, too. 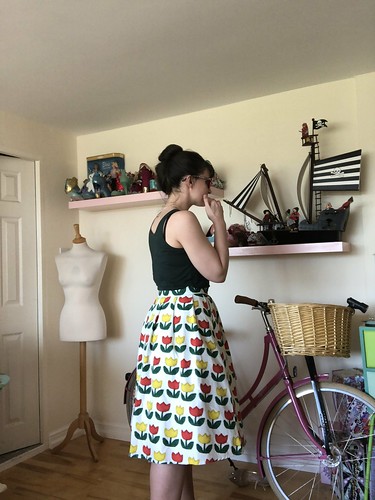 Anyhow, how would you dress for the warm weather? Is that it, after those glorious few days of sunshine, or are we in for any more?
Posted by char at 15:22