I've decided recently that it would still be OK to share some of my favourite finished projects, even where it's been quite a while since I finished some of them. I think my blogging fell a little by the wayside last year when things got particularly busy. I seem to be getting worse and worse at time management. Or, possibly, taking more and more on. 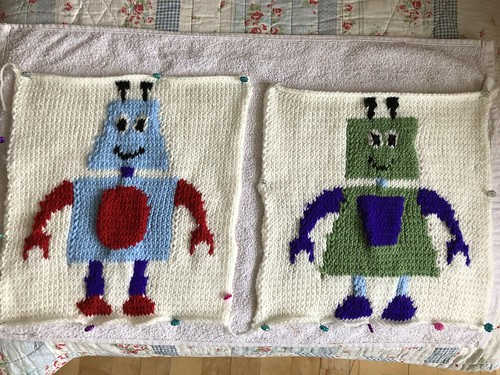 But anyhow, this is probably one of my favourite things I've ever made. Whilst I used to take a lot of sewing (and a few knitting) commissions, these days I only really make things for people if I think they're going to appreciate them, and if I actually *want* to. 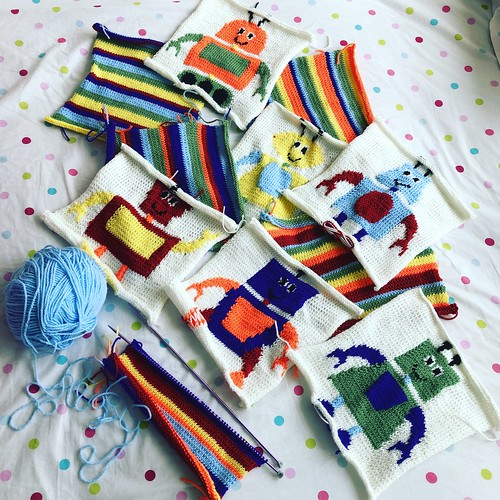 With the announcement of a new baby in the family, I decided that I would need to find a suitable gift to make, and was torn for a little while between two of Vikki's patterns on Ravelry - fluffy white clouds and these rainbow coloured robots. I knew I wanted something bright and colourful and gender-neutral as the sex was unknown at that point. I decided that the robots were amazing and more of a challenge. Plus, the robot blanket is constructed in smaller squares which are later attached together, which makes it more practical for me to take with me on weekends away etc, than a large blanket on giant needles. So, that was my decision made and I printed the pattern out, ordered the recommended wool from the internet, it arrived a couple of days later and off I went. 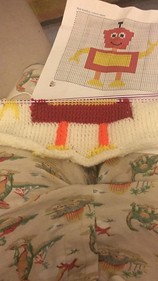 For a few months, I worked on these little critters in my Monday evening post-guides craft sessions, in the passenger seat of the car on long journeys, on weekends away, in doctors' waiting rooms; just about any spare moment I had was broken down into how many stripes I could get finished before I had to leave for an appointment etc. 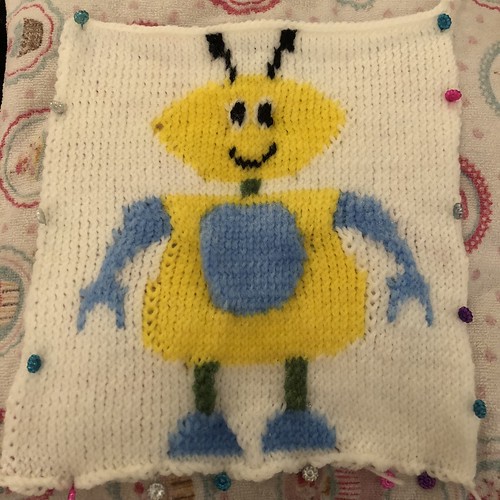 As with all of Vikki's patterns, the instructions were clear and I found that I quite enjoyed working from the charts. This is also the first time that I paid much attention to actually blocking the squares, as I was finding that some of the stripes ended up being a little larger than the robot blocks. I'm not sure why that was, other than maybe being pretty loose with my casting on of the initial stitches. 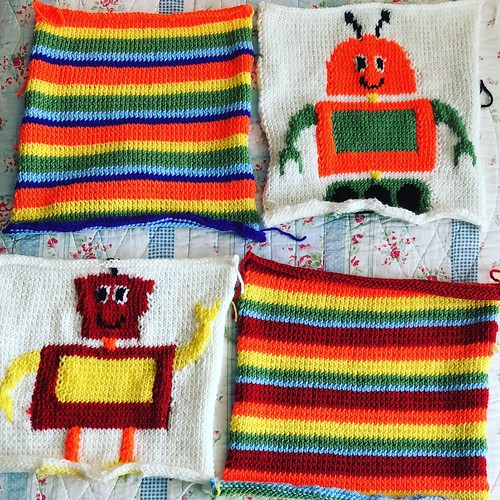 I stitched it all together when the blocks were done - there's another thing I'd like to learn to be a bit neater with. Once joined, I had to knit a border, which at least secured everything around the outside edges, by picking up stitches from each block along the edge. This didn't take too long although the top and bottom edges had a lot of stitches to keep on the needles - longer circular cables would have helped me here. 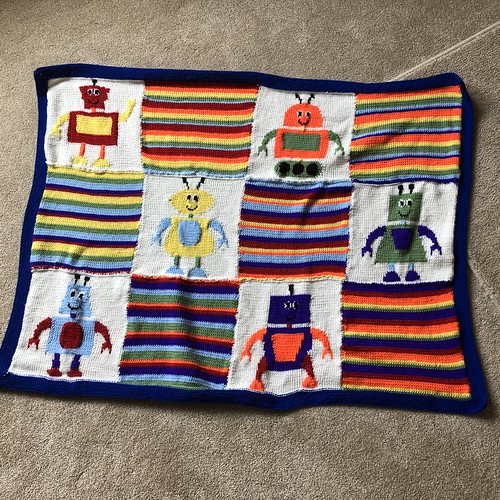 But, it was finished just in time - literally on the day it was required. Which means that the above photo was taken in a rather hasty rush. I don't think it ended up being as wonky as it looks there. But, the main thing is it was finished and gifted to it's recipient, who will hopefully appreciate it. I love the feeling of knowing that you've made something for someone which they'll hopefully treasure.