Since I moved I have become a regular in the chalk paint aisle at my local DIY store. Here's one of the things I worked on over the Christmas break and which turned out pretty well. 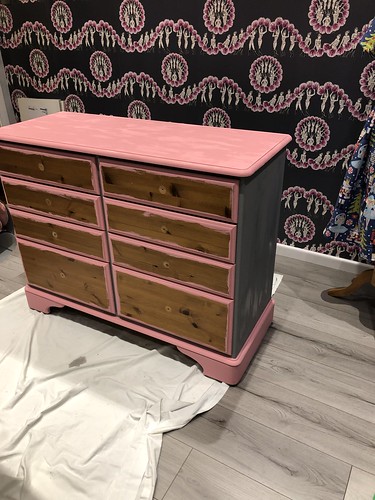 We were given a trailer-load of pine furniture by a relative shortly after we moved and it's all lovely stuff but not entirely to our taste, so once I'd furnished one of the bedrooms, I decided that I could use a set of drawers in the sewing room, for storage of notions and smaller items.

I headed to Pinterest for some inspiration and was almost settled on painting the drawers in an ombre or a rainbow effect, when suddenly I remembered how much wallpaper I had left over in off-cuts (I'd originally planned to paper two walls but ended up just doing one). 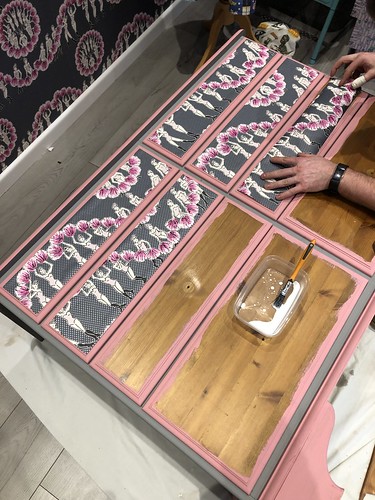 After a little googling, I had a vague plan of how to go about this. I used pink chalk paint

to paint the sections of the chest which I was not going to cover with paper - the tops, sides and edges of the drawers themselves. Since I'm lazy and didn't sand the chest before I started, it needed three coats to stop the paint looking patchy and give it a decent coverage, but you might get away with fewer coats if you were more into preparing the piece.. 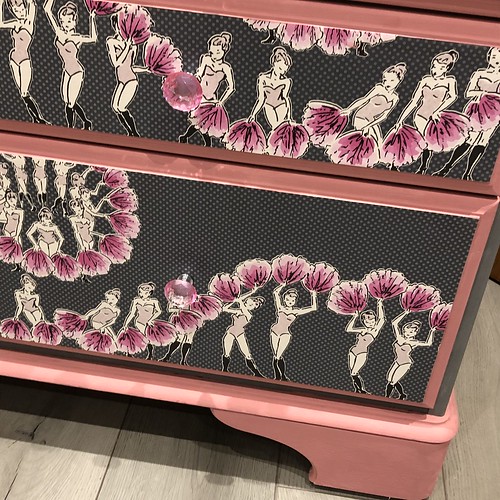 Once the paint was dry I mixed up a watered-down PVA glue and painted the drawer fronts with this, leaving it for a few minutes to go tacky whilst cutting out the papers to fit the fronts. Cue a lot of measuring, craft knife action (and assistance). I painted those with the glue mix as well before fitting them into place. I left the glue to dry overnight and then painted the whole thing with this furniture lacquer

. Again, I needed to use several coats of this to get a finish I was happy with and to ensure I covered the paper plenty of times, too. The final touch was to add these pink crystal drawer knobs

to the front, which seem to be such a good colour match to the paper that they blend right in. 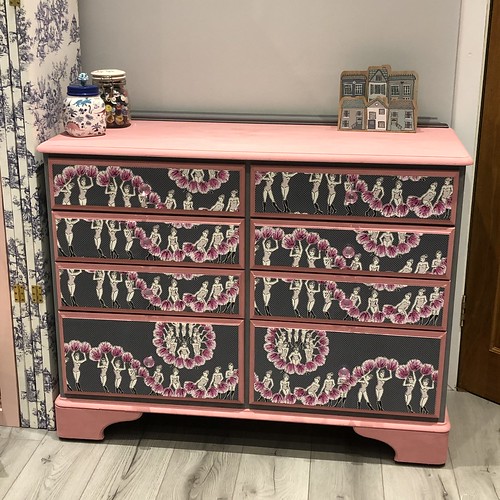 I'm pretty pleased with how these turned out and have recently taken in another unwanted chest of drawers, which I'm trying to decide on a plan for so that it fits our living room, which is next on the schedule to be decorated. I might do something similar.
Posted by char at 11:38