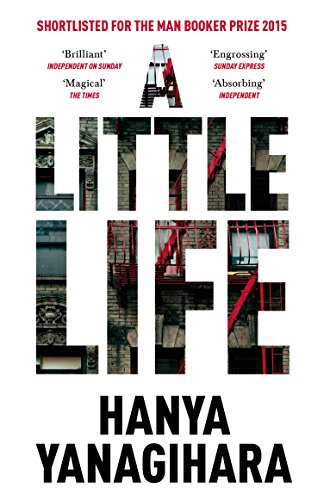 I'm not sure what took me so long to get around to reading this. Probably everyone I know and ever talk books with over the past couple of years has recommended A Little Life to me. I was only reminded of this when I helped out at a guiding weekend away and the venue we stayed at had a second-hand bookshelf, with a copy of this sitting in the middle of the shelf.

It took me a little while to get around to reading it, as I had a pile of festive fiction to get through over Christmas, but it was one of the first books I read in January, and turned out to be one of those books I just couldn't put down. I took it everywhere with me.

I don't know what it was but I was hooked by the end of the first chapter. Discovering more and more about the group of four friends who'd met during their college years and stayed friends; the book follows Willem, Jude, JB and Malcolm right through to middle age.

I think that stories to do with long-lasting friendship groups always manage to reel me in because I've always had this sense of longing to be in one of those. The friendship groups which stick with you for the rest of your life and see you through every good and bad time. I mean, I'm not saying I don't have friends- I'm very lucky to have a lot of wonderful ones, but I do find that they come and go. Anyway, I digress.

A Little Life centres on our protagonist, Jude, who is clearly hiding some suppressed childhood traumas along with various neurological and movement related issues. Even his closest friends realise at one point that they have no idea about his background. But they stick by him nonetheless and once they've finished college, he and Willem share a tiny New York apartment, ensuring it has an elevator in order that Jude, when his immobility is at it's worst, can keep as much of his independence as possible.

Whilst I clearly wanted to uncover his secrets, I didn't find that A Little Life felt as forced as so many other books when it came to piecing together the back story. The gentle pace of the groups' lives progressing was strangely mesmerising like the slow and steady hum of a sleepy train carriage and I was in no rush for the grand reveal. Which is lucky, because as my OH pointed out at one point..."it's a really big book for being about such a little life...!"

Yes, there are some parts where I didn't want to read and yet wanted to discover what happened all at the same time (TW: graphic sexual abuse, violence, drug abuse, rape, self harm). But somehow every page was still compelling.

Honestly, I don't know how the balance was struck so perfectly, but I really think it is in this story. I longed for it not to end, even when it was forty years later and closure was imminent. I may have even shed some tears.

I know that there has been recent talk of film rights and the like, which makes me kind of want to cry a little. I think that when a book has such an effect on me, I don't want to see a adaptation of it, because it won't be as good as what went on in my head. But, the more people it reaches, the better, I guess.

Have you read A Little Life?