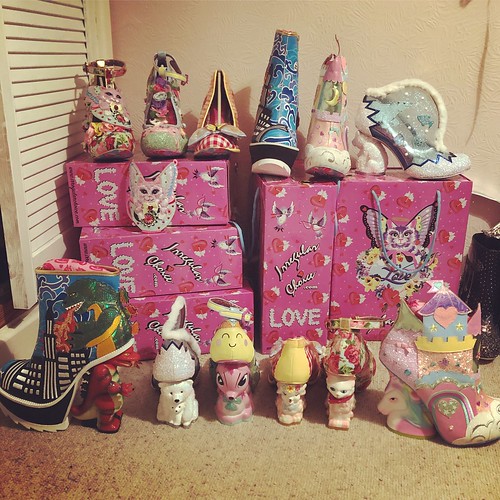 I don't think I can have been more than sixteen when I first came across a pair of Irregular Choice shoes in the flesh. So, I'd been to the Bullring (the nearest big shopping centre to me when I was in my teens) and had discovered Schuh, the former IC stockist. And completely fell in lust with them. They were cream, flat boots with images of cowgirls on the sides and actual metal spurs on the backs. I saved up my wages from waiting tables and my monthly allowance and probably my dinner money too, in order to afford a train ticket to Birmingham and this amazing pair of boots. And at the time, it was probably the most expensive thing I'd ever purchased. I had that happy buzz on the train home, along with a kind of feeling of "how could I be so frivolous", which I've experienced oh so many times since.

My collection has certainly grown since then, but the feelings of "ooh, this is amazing" have very rarely subsided.

Gem recently posted here about her similar feelings on the brand which we share a love for, and I am in total agreement, to be honest. My collection grew slowly over those first few years, with the internet only just starting to become a thing. I used to save up and buy the pairs I loved the most each season from Schuh. I remember paisley swan prints, teddy bear prints, ice cream prints and unicorns with big pink ankle ties, as being some of the first ones I was able to buy full price (I was at Uni at this point and probably saved all of my student loan for this alone). Lets Buy Shoes (an IC discount website) was a god-send.

Over the years, the styles and releases became larger and more frequent and I was constantly amazed with the new and unusual ideas that came out. Ice cream cone shaped heels. Glitter, orange velvet, robots, I don't think there was ever a season where I didn't have some serious lust going on when the lookbook popped through the door.

Having built up a lot of my collection second hand through eBay, or discount websites, I was so excited on actually visiting the Carnaby Street store than I came away with several pairs of shoes and some clothes, too. Remember when they did clothes?! I wish they still did.

Anyway, the years went by and just when I thought things couldn't get any more out there, in 2013 they only went and released a shoe with a heel in the shape of a bunny. Honestly, my mind was blown and there began an era of wondering just what they would come up with next. The following year we got deer heels, and then I stop remembering - the releases merge but we've had dinosaurs, ballerinas which actually play music in the heel, pandas, unicorns, and lots more, not to mention all of the huge collaboration releases with Disney. (Disney isn't really my thing but I'm always intrigued to see where they go with these).

More recently, I've lost interest in some of the more recent releases; I almost felt they were becoming a little more mainstream and too staid for my liking. I love glitter as much as the next person, but plain glitter heels in heights which I find uncomfortably low, just weren't my cup of tea.

So, it seemed pretty fitting to me that this year, as part of the celebrations to mark the 20th anniversary of the brand, Irregular Choice decided to bring some of those amazing character heels back...with bells on. This not only sees the re-release of amazing characters such as the dinosaurs, but added intrigue such as sounds, neon lights and oh so much glitter. Fluff, flowers, removable embroidery embellishments; honestly when I saw the release photos there wasn't a detail I didn't adore. (Well, except for those scary gnomes.)

I'll post more photos as soon as I can, but I've happily made space on my shelves in the shoe room (which I also plan to post about soon) for these and I'm super pleased that after all these years they're still able to bring the wow factor.