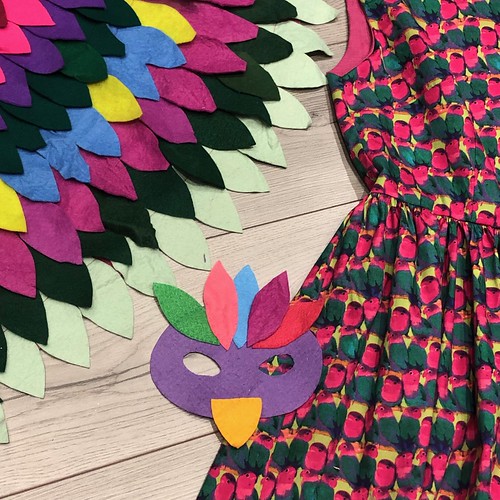 This year, instead of an Xmas party, we're bringing the party forward and having a summer get-together. Instead of just a BBQ, it was decided that this party should have a theme, and they agreed on pirates. (As a Scrooge, I'm fully in agreement with the avoidance of a festive get together, so I'm on board. Pun not intended.)
A costume party does, of course, mean the requirement for a costume. And surely a pirate costume is a fairly simple one - how many times have I dressed up as a pirate for nights out, parties and the like? Well...loads. So, yes, I have an eye-patch, hat and a pair of boring black boots which I could don for the day. But, I kinda wanted something a little bit....different. 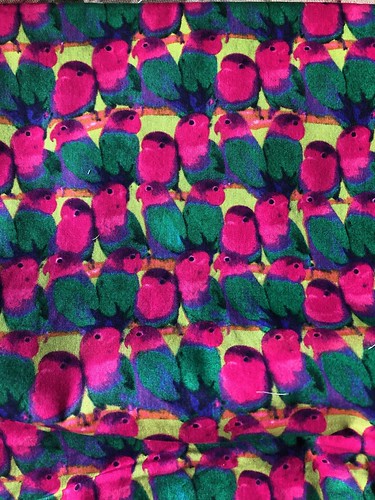 After pondering this for a while, I wondered whether it would be possible to make a parrot costume. They're piratey, right?! I had visions of one of those terrifying mascot costumes to begin with, but decided there must be a better way to do this. After some online searching, I'd found plenty of tutorials on how to make a pair of bird wings for a kid, and decided I could adapt this.
Not leaving myself with very much time before the party, I decided I would try to use up what I already had in the sewing room, as it seems dumb to have to buy a shitload of fabric for a costume which will only be worn once. I hunted through my fabric stash looking for inspiration and came across this (parrot?) bird print fabric, which I figured would do for a base, with the added bonus that I will get actual everyday wear from it. 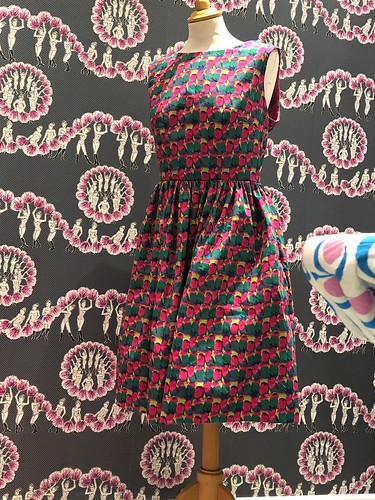 So, first things first I made myself an Emery dress, and lined the bodice with an old pillowcase from a set of bedding which I'd decided was past it's best - I have a drawer-ful of old fabrics like this, all washed and ready to use for scraps, toiles and linings where needed.

I was still pondering how to do the wings, but having made the dress, I at least had a colour scheme to work with. Using that old bedsheet as my base fabric, I measured my arms from the centre of my back to my wrist, and then measured how far down I'd want them to sit, from my shoulder blades down. Marking those measurements out on the sheet, I joined them up with a curved line, and made sure to cut them on the fold so that I'd end up with two wing base pieces of fabric, which matched in size. 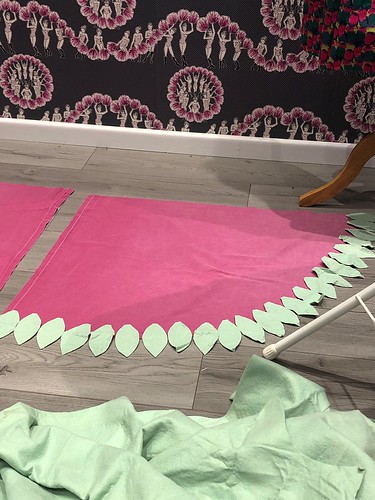 Next up, I raided the felt stash, cut myself out a feather shape from cardboard as a template and set to work with my rotary cutter. When I started this, I had done absolutely no calculations as to the number of feathers I would need to complete this. Turns out, it's quite a lot.

Starting at the bottom of each wing, I pinned each feather down in place, ensuring that they were close enough to each other that you couldn't see the backing fabric, and then machine stitched them along the wing from one end to the other, in a line. I made sure that my stitching is up at the top quarter of each feather, in order that it is most likely to be covered by the next row of feathers up. 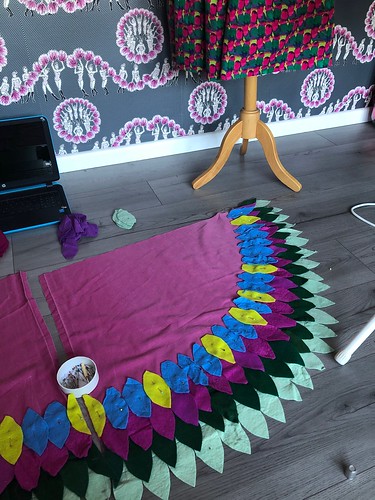 I then continued to work up from the bottom row, choosing a new colour each time (I didn't follow any pattern with the colours, it was mostly down to how much of each felt I had available as I was using up scraps) and pinned them over each other, so that they'd cover the gaps in the row below. On some rows I was able to add half-feathers to the centre edges to help with the overlaps, but again this was entirely felt-permitting. 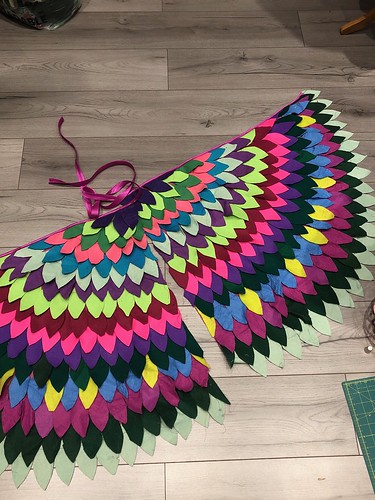 When I reached the top row, I trimmed the top edges, so that any feathers which were overhanging the top edge of the backing fabric were trimmed back down to a straight edge, and then applied some satin bias tape, to give a clean edge. At the centre, I left a long end either side so that I can attach the wings to fit, by tying these ends in a knot or a bow at the centre. This gives them more opportunity to move with my arms, rather than being stitched together in the middle.
I also added another set of bias tape ties about halfway down the back of the wings, for more stability. 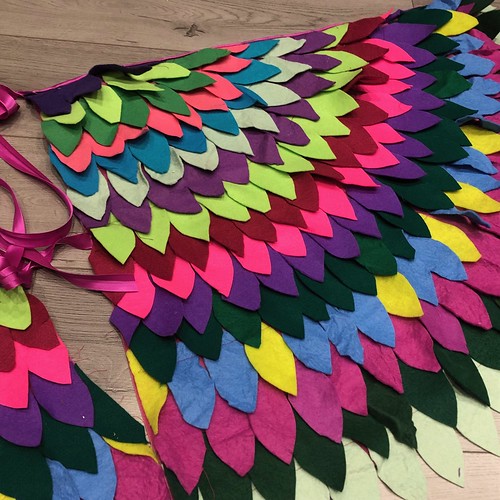 Next up, I needed to add something along the top edge of the wings, to attach it to my arms when I'm wearing them. I stitched some lengths of elastic to the inside of the backing fabric, so that it's not visible from the front. I put a larger loop, big enough to wear on my shoulders, about 6in in from the top corner, and a smaller loop, which will fit on my wrist, a little way in from the other edge. I didn't measure these, just had someone hold the wings on me, and then pinned where these needed to go, as it really would depend on the arm length etc of the person wearing them. 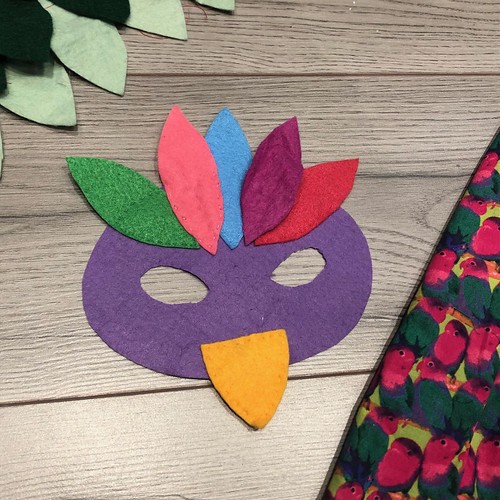 Finally, from a little more scrap felt, I cut an eye mask shape and two beak pieces, which I hand-stitched around the bottom edge of the mask, sandwiching it in the middle. I cut out some eye holes, and decorated the top edge with a handful of leftover feathers. A little bit of elastic stitched on the back to go around my head and it's ready to wear. 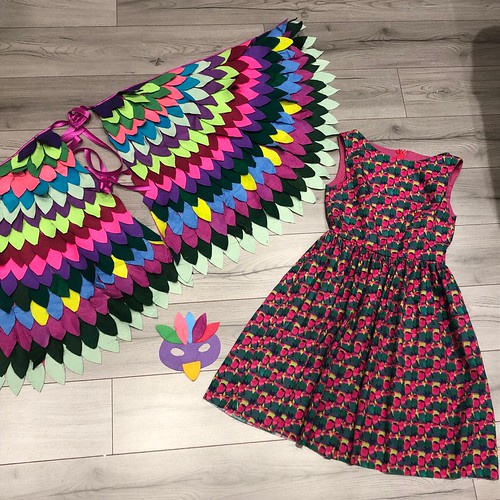 So, there we have it. My tenuously pirate themed parrot costume. Super easy and made entirely from things I already had lying around in the sewing room.