The Warrior's Princess by Barbara Erksine

I decided that i wanted to 'expland my reading horizons' in a trip to the library before Xmas, which therefore saw me choosing books out of my usual comfort zone..by the time i got to the end of the first chapter i was completely hooked on the simultaneous stories of Jess; a teacher from London whose confusing attack drives her to seek refuge at her sister's home in Wales, and the historical story of Celtic princess, Eigon, who shares a dark secret with Jess. The first few chapters really manage to capture the reader's interest in both of the main characters' stories.
Having never read a 'timeslip' novel before, i suppose the concept took a little getting used to in terms of stopping my cycnical side thinking "this would never happen; ghosts aren't real, it seems so realistic until the fairytale addition of ghosts etc" but once i let myself "fall into" the concept, i found myself quite engrossed in the two stories and the fear of the girls being caught by the respective followers / attackers did keep pages turning right up until the end..the ending was a little rushed, having been built up over 350 pages or so, i was a little disappointed that proportionately, not so much focus was given to the crescendo of events..and maybe it was a little 'fairytale', but it didn't spoil the enjoyment of the book for me.. 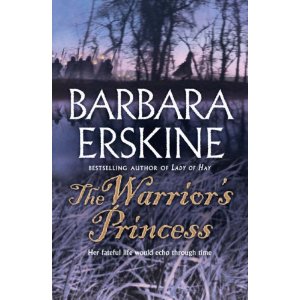 after reading the book, i did a little research as far as reviews from other readers went, and found that the general views seemed to be that perhaps Erksine's books all follow a similar theme in terms of plot and storyline, so it was felt that this book was "nothing new", and that her earlier work may have been better..having not read any other Erksine novels, i can't comment on whether this is the case, but these views have made me a little more hesitant when it comes to reading others..although i can say that i thoroughly enjoyed and would recommend the Warrior's Princess, i don't know that i would be interested in reading the same concept with the characters' names changed..

has anyone else read any Barbara Erksine? i'd be interested to know whether your views are the same as others who have reviewed the book online, or not..
Posted by char at 10:23