Well, if you're not interested in dressmaking, sewing or dresses, you're probably not going to get a lot out of this post. Stick around, by all means, just don't say I didn't warn you. I started the month off with a fabric-shopping trip to Birmingham, and came back with a ludicrous amount of fabric. I did manage to get Dress Four made that very weekend; dubbed the  #DollyClackettSewingBee. I've even worn it a few times since, which is good going for something I've made myself.

Inspired by the weekend of stitching, during that next week I managed to finish off dresses five and six of the year.I then visited Pure London, to fill my head with thoughts of other pretty dresses which I want to make mine in the coming months. After hearing such good things about the pattern, I made my first Emery dress.I also bought a new kettle, and was sent a lovely Valentine's card. We had some ridiculous stormy weather, and a lot of trees fell down. This was the best one by far. I say best because this could be considered what some might call karma.

More dresses, you say? Go on then. I rediscovered this vintage print fabric, which I couldn't think of anything better to do with than this Butterick dress, and then another Emery for good measure. I'm making some progress on number ten, which is going to be my #SewDollyClackett entry, but I don't think it's going to be done by the end of the month - quite. 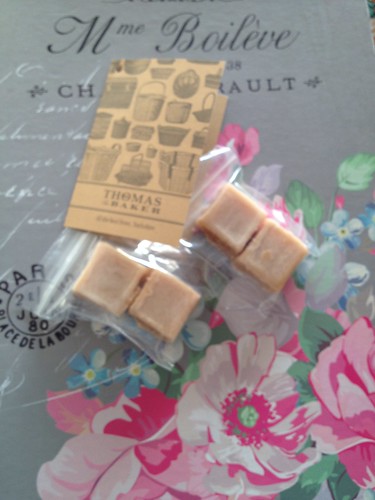 Finally, I was sent some free fudge by the lovely folks at Thomas The Baker - have you seen their site?