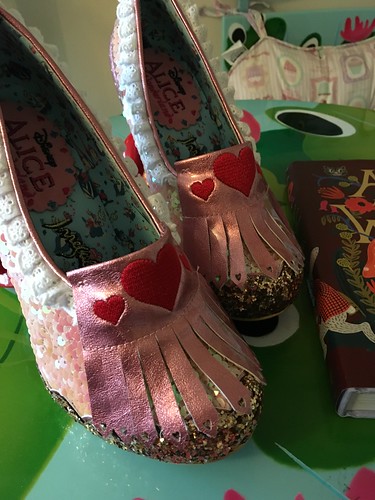 This week's Sunday Shoes post features a pair I really didn't expect to add to my collection. Although I'd been really taken with these in the flesh on the day of the launch, in the end Flowers Can't Talk won me over and were by far my favourite.

Then, everything seemed to be sold out just about anywhere I looked, so I thought my Alice collection was complete. I was okay with this. However, a quick browse on a site I had some gift vouchers for and I managed to find these in stock last week. I wasted no time in trading my vouchers for them! They're available on Office in most sizes at the time of writing this. 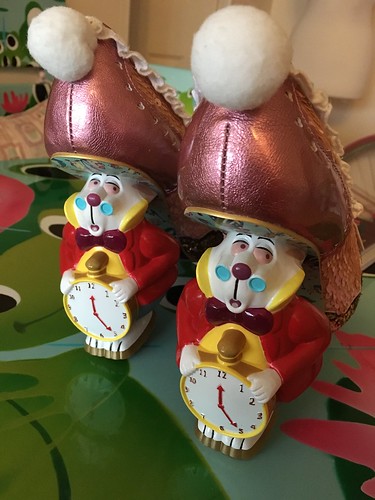 So, this style is called White Rabbit (of course!) and came in a black colourway as well, but I certainly prefer this one. which I'd describe as a mixture of pink and peach. The main sections of the uppers are covered in iridescent sequins, which catch the light wonderfully and the fronts of the shoes are covered in a lovely bronzey coloured glitter, which is nice and thick.

The backs of the heels and the fringed detail on the front are a pale pink metallic leather, the fronds of which have tiny hearts punched from them. And then of course, the fronts of the shoes also sport three embroidered red hearts each, as a nod towards the playing cards in the movie. 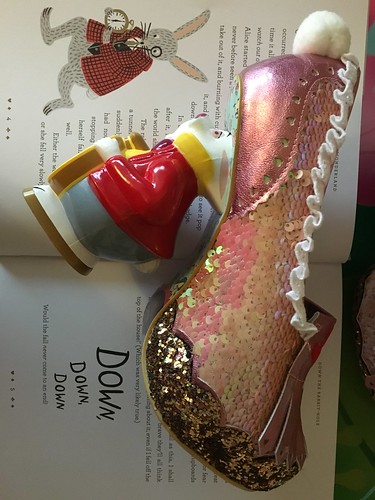 Around the top of the shoe, rather than the scalloped edging of which I've become so fond lately, is a ruffled broderie anglaise fabric trim, which I think gives a dainty feel to the shoe boots which could otherwise look quite chunky in shape. It also reminds me of the neck ruffle worn by the rabbit in the movie. And on the back of the shoe, a white pom pom tail. This is the only feature I'm not so keen on. I don't like the one on my Izzy Bear heels either, and have been quite tempted to remove them from both pairs. I'm not sure why I'm so set against them, as I don't usually have any issue with pom poms.

Finally, the heel itself. A little wider than Alice, I believe (although I've not had chance to measure them against one another), the rabbit feels more heavy. He's moulded holding his pocket watch, meaning there are no arms poking out (unlike the flamingo heads on Blushing Bird), so I have no concerns here about catching the heels on anything. The weight of them makes the shoe feel pretty sturdy, too. 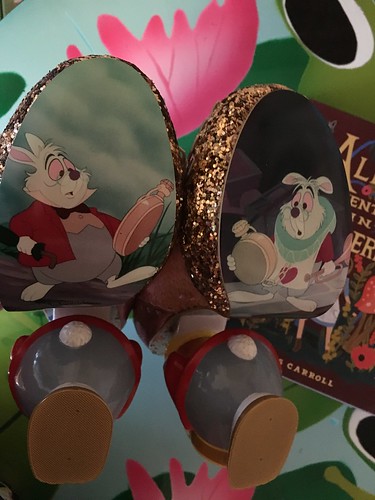 I was a little concerned after ordering these that they would be too small - weirdly, although all of the other heels I tried from this collection were larger than usual, White Rabbit seem to be almost a full size too small, according to many people who have purchased. Because all of the shoes I tried on at the launch (I didn't try these ones), were on the large side, I figured that I'd be fine in my regular size, which is what I ordered.

They're a little more snug than I would probably have liked, but they do fit OK.