We're the captains of our own souls..

It's been a funny old week. This dress was another which arrived from Dresslily the other day, although for some reason they seem to have sent everything out separately. I was reminded of this necklace when I saw the mix of colours and think it works quite nicely with the V shaped neckline.

I wore this for a fairly decent day at work and then to meet a friend for a drink. We sat around in the beer garden in a local pub for a little while, watching the players on the bowling green in full swing until the sun went down. It was rather nice to have a catch up, although a little bittersweet when it became apparent that some people never change.

This might be one of my favourite novelty bags of all time. I think this might be the first photo I've shared of it (the shame!), but it was a birthday present, and as I've come to expect with anything from Vendula London, it's just awesome. Such attention to detail. The cross-body strap has lovely little tassel details on and the caravan itself is chock full of little details.

I've had this necklace for a good few years now - one of those "few pence from eBay" ones, which would take so long to arrive that you'd have pretty much forgotten you'd ordered them. As for the shoes (which you can barely see), they're a pair of Irregular Choice which I've had for years and still adore - the fronts of the sandals are adorned with little jewelled frog charms. 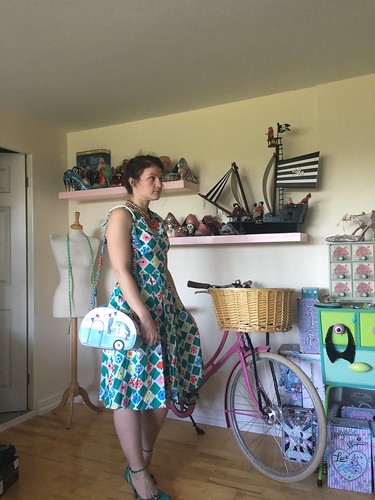